We still have four months to go, but we already know this will be a transformational year for venture capital investment in South Florida.

eMerge Insights, a biannual venture capital report released today by eMerge Americas (full disclosure: I authored the report), puts numbers behind that bold statement. Through June 30, $1.54 billion was invested in 60 startups and later-stage companies in South Florida. That’s already more than the $1.38 billion invested in all of 2018 -- ”and we are just getting started,” said Felice Gorordo, CEO of eMerge Americas, the organization behind the annual conference as well as a number of ecosystem-building initiatives.

“We always envisioned Miami would be a hotbed of entrepreneurial activity, and we now have the comparative data to trace how much this ecosystem has evolved and the transformational impact we are making as a community,” added Melissa Medina, president of eMerge Americas.

To be sure, there are two mega-reasons for that outsized $1.54 billion number: an estimated $900 million round into the SoftBank-backed  REEF Technology (formerly ParkJockey), a real estate technology startup, and $280 million that flowed into spatial computing company Magic Leap. Still, thanks in large part to those rounds, the Miami metro area ranked 7th in the nation. 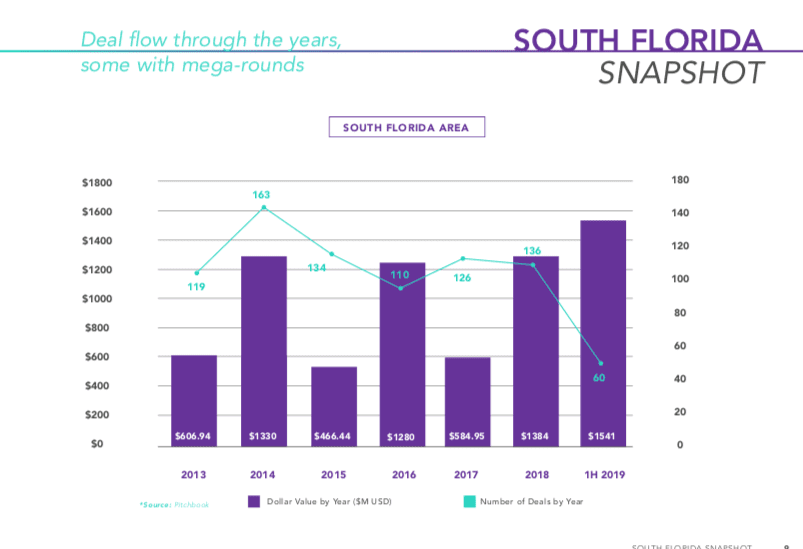 Here are some other findings of the mid-year report:

The report also includes looks at the trends – including exits, unicorns and hot and cold sectors. It spotlights several startups, including REEF, Technisys, CarePredict, Neocis and Shoot My Travel.

And it makes the point that venture capital is only one aspect of ecosystem development. Behind this news is a number of key developments this year. Among them:

The first installment of eMerge Insights, a series supported by Knight Foundation and Florida International University, published in advance of eMerge Americas and analyzed 2018 investment rounds.