Nova Southeastern University announced that its new Alan B. Levan | NSU Broward Center of Innovation is  scheduled to open in July 2021. As a  continuation of a long-standing public-private partnership with NSU and Broward County, the Levan Center of Innovation will occupy the entire fifth floor of NSU’s Alvin Sherman Library, occupying 54,000-square-feet of space.

“We are leading the effort to nurture an innovation ecosystem right here at NSU that puts Broward as the hub of innovation for South Florida and geographically located in its center. Today’s competitive, tech-driven environment calls for strategic partnerships to stimulate economic development and NSU, as a ‘knowledge-based industry’ is proud to house this on our campus,” Dr. George Hanbury, NSU’s President and CEO, said in a statement..

The Levan Center of Innovation was launched as a collaborative effort between NSU, its Board of Trustees, and the Broward County Board of County Commissioners to create two “theory and practice” integrated programs: an academic curriculum of innovation for all of NSU’s 15 Colleges, its research centers, and NSU’s University School; and also an economic development program for the county to “scale up” early-stage and young startup businesses, while attracting and retaining tech corporations in the region. 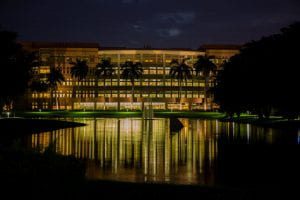 The center will bring together entrepreneurs, students, faculty, staff, companies, venture capitalists, angel investors, economic development experts and other creative individuals to build better people who can then build better businesses, the university said.  The center will be a catalyst for the region’s innovation ecosystem to develop and upskill local talent—and attract talent from outside the region.

“The Levan Center of Innovation will develop into a hub-and-spoke model where companies can scale-up and create knowledge-based jobs in South Florida while stimulating economic development on a much grander scale than we’ve seen before,” said Hanbury.

2 Health-tech company Tellus has been acquired

Tellus, a Deerfield Beach-based health-tech company, has been acquired by Kansas City based Netsmart Technologies, the South Florida Business Journal reported. Terms of the deal were not disclosed.

Tellus specializes in electronic visit verification and claims processing for home health care, and its clients include Blue Cross Blue Shield, Aetna and UnitedHealthcare. Its  HIPAA-compliant software includes features such as appointment scheduling, caregiver check-in and checkout, documentation and secure communication with the care team.

Netsmart plans to retain Tellus’ South Florida HQ and most of its 60 employees, the SFBJ reported.

For the fourth consecutive year, Tellus landed on the Inc. 5000 ranking of the nation’s fastest-growing private companies. It was No. 778, with 613% three-year revenue growth. According to Crunchbase, the company was founded in 2013 and raised $9 million in a Series B round in 2019.

3 One tech company coming, one going, and they both cite talent as the reason

You win some and lose some.

Everseen, an Ireland-based tech ccompany. is opening a research and development office in Miami, the Miami Herald reported. A company whose anti-theft technology is used by Walmart, Kroger and others, has leased space in Edgewater and plans to bring in up to 30 workers. The company’s chief strategy officer told the Herald Miami was chosen because of its arts and culture and talent base and because  “we wanted an area where the best mind can focus on cracking big problems.”

Meanwhile, Pro Unlimited, a company that manages gig workers, is moving its longtime South Florida headquarters to San Francisco, citing the Bay Area’s talent base.  The company had been based in Boca Raton since it was founded in 1991 but decided to shift to San Francisco after its new CEO, Kevin Akeroyd, took over in August, replacing co-founder Andy Schultz, who had led the company for nearly three decades, the South Florida Buisness Journal reported. Globally, the company has 1,200 employees, with 400 already in the Bay Area.

Motorsport Network, which reaches billions of racing fans annually through its digital platform for automotive sports, said it will co-develop an office building in Little Haiti’s planned Magic City Innovation District and move its headquarters into the building.

Now in the Miami Design District, the company’s new HQ will occupy the top three floors of the new building will consolidate that office, as well as offices in Orlando and Charlotte, NC. The operations will include its Motorsport Games division, which produced the NASCAR Heat video game, the South Florida Business Journal reported. The company employees over 600 people worldwide.

The new headquarters will be "symbolic of the significance of what is being built in a neighborhood within this city with such a rich, cultural heritage and history, with a reimagining of what office spaces look like, featuring bespoke amenities in a creative media and technology-motivated environment for true innovators to thrive,"  said Motorsport Network CFO Carlos M. Ruiz, who will be relocating to Miami, in a statement.

Last but certainly not least, a shoutout to Miami entrepreneur Adrienne McWilliams, founder of Travelspective and Bridge, for her very interesting take on Quibi’s rise and fall. She saw it coming. Read her take on Medium here.