5 things to know in #MiamiTech: Ryan Cohen to be GameStop chairman, the REEF robots deliver, opportunity knocks – and more

Ryan Cohen’s stock is rising - again. He is slated to be taking on the position of chairman of the board of GameStop after the company’s annual meeting in June, the South Florida Business Journal reported.   The new role comes amid a management and board shakeup since the Reddit-charged stock surge earlier this year. Last month the board formed a committee, chaired by Cohen,  to “identify initiatives that can further accelerate the company’s transformation.” Cohen has been a director since earlier this year when his firm RC Ventures took a stake in the company.

Cohen was also in the news for another reason this week. The Bal Harbour resident made the  Forbes’ World’s Billionaire List with a cool $1.6 billion. He was among more than 50 South Floridians making the list. Who was number one? Former homeboy Jeff Bezos, who graduated from Miami Palmetto Senior High.

Cohen founded Chewy in 2011 and stepped down as CEO in 2018 soon after the company was acquired by PetSmart for more than $3 billion, the largest e-commerce transaction at the time. The Dania Beach -based company recently posted its first profitable quarter as a public company amid a pandemic-accelerated surge in new customers.

Larry Ellison, the$100 billion man according to Forbes list out this week, purchased an $80 million 7-bedroom, 15,514-square-foot oceanfront mansion in North Palm Beach. No word yet whether the new abode will become the Oracle co-founder’s permanent residence, but the tax advantages would be substantial.

Miami’s REEF Technology and robotics startup Cartken jointly announced the arrival of self-driving delivery robots in Miami. The autonomous robots will use their sophisticated mix of sensors and cameras to navigate busy sidewalks, crosswalks and curbs.

After a successful pilot launch, the electric-powered robots are now delivering dinner orders from Reef’s network of delivery-only kitchens to recipients located within a ¾-mile radius in Downtown Miami. REEF will be rolling out more Cartken robots in additional locations and neighborhoods within the next few weeks. The robots were designed to make short-distance deliveries of small orders more efficient, all while helping to reduce road congestion and pollution. Long term, REEF and Cartken expect many new jobs to be created surrounding the maintenance and technology of the robots.

“Delivery continues to be the driving force behind supporting many of our beloved restaurants while staying safe during this pandemic. However, the rising demand for delivery has created a bottleneck during peak dining hours that slows efficiency,” said Matt Lindenberger, Chief Technology Officer at REEF. “We’re looking at our robot delivery service as a long-term solution that can advance the delivery ecosystem by offering speed, quality and scale while reducing congestion and carbon emission.”

Consumers who order from a REEF partner brands such as Della Bowls, Krispy Rice, BurgerFi, Sam’s Crispy Chicken and others using either Postmates, UberEats, DoorDash, or GrubHub may be prompted with the option of a robot delivery. When the robot arrives at a house or apartment building, it waits outside and sends a text message alerting the customer that the delivery has arrived, typically within 30 minutes or less. While it makes its delivery, the robot’s compartment is locked so that no one but the recipient can access the food. 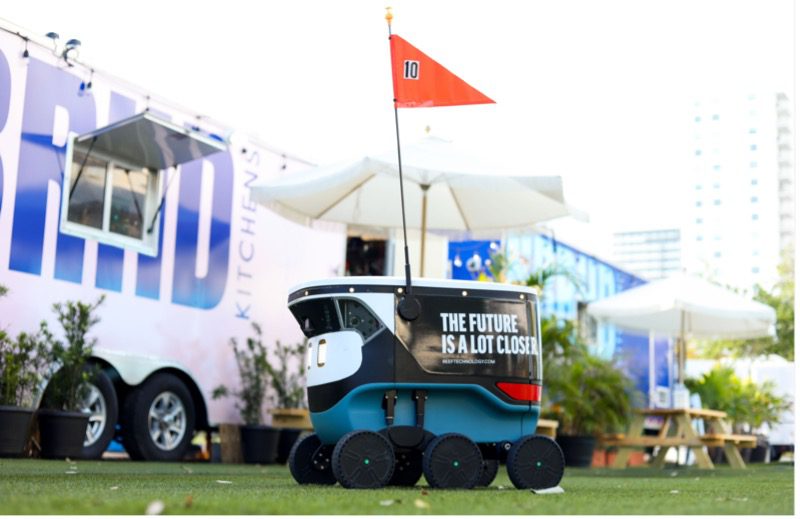 The Collective has unveiled plans for its first co-living project in South Florida within a mixed-use building at 2825 N.W. Second Ave. in Wynwood. The building –351,443 square feet over 12 stories along 29th Street and eight stories on 28th Street – would have 108 apartments, 70 hotel rooms, 9,508 square feet of commercial space, and 163 parking spaces,  the South Florida Business Journal reported.

Forget about the bunk houses in San Francisco -- this is high-end co-living. The Collective Wynwood would have 82,000 square feet of co-working space, meeting rooms, rooms with physical games, virtual gaming rooms, a communal kitchen, a library, a fitness center, an artist workshop/studio, a garden, a pool deck atop the 8-story building, and a roof deck on the 12-story building.

Offered by Pareto Holdings, a new firm founded by Shutterstock founder Jon Oringer and investor Edward Lando, the Pareto Fellowship is a free week-long event June 7-11 during which  Pareto Holdings will invite aspiring founders to build new companies with the Pareto Fellowship team and friends including SoftBank’s Marcelo Claure, REEF’s Ari Ojalvo and of course Mayor Francis. Founders who are selected for the fellowships receive access to workshops, office hours, and interactive sessions with the Pareto team and other leading entrepreneurs, operators, investors, and community leaders. Select participants will receive direct funding and support to launch their companies after the Fellowship.

Applications close on Saturday, May 15th, 2021. Find out more here.