8 things to know in #MiamiTech: We are welcoming our newcomers, getting into the holiday spirit & more news to note

1  #MiamiTech newbies get mayoral welcome - and it's gone viral

Miami Mayor Francis Suarez is rolling out the red carpet for the influx of founders and investors moving to Miami, whether they are riding out the pandemic or making the relationship more permanent. (Keep up! Auston Bunsen's Sunday night Que Bola tweets will help keep you up to date). In addition to welcoming our new residents — Lucy Guo of Backend Capital is one of the most recent VCs to be welcomed with a cafecito invitation  (pictured above) — the mayor announced he was going to set up a Miami Tech Council within the City of Miami to make sure the tech community has a seat at the table and concerns are heard, and welcomed folks in the community to raise their hand for the committee.

During an IGTV Q&A with Shutterstock's founder and executive chairman Jon Oringer, also a new resident, the mayor also revealed he was considering adding a chief of technology and innovation to the city team, now that our man Mike Sarasti is the City’s CIO. Oringer said he planned to open an incubator,  Pareta Ventures, and said he appreciated the mayor's business friendly welcome and refreshing openness.

"We came here to build more businesses, create more jobs, incubate some businesses, make some investments, find amazing entrepreneurs -- it has been a great experience so far," Oringer said.

Besides chiming in with now-viral tweets and hopping into Clubhouse rooms, the mayor is holding a Zoom talk on Monday at 1 p.m. DM @francissuarez if you want to attend. 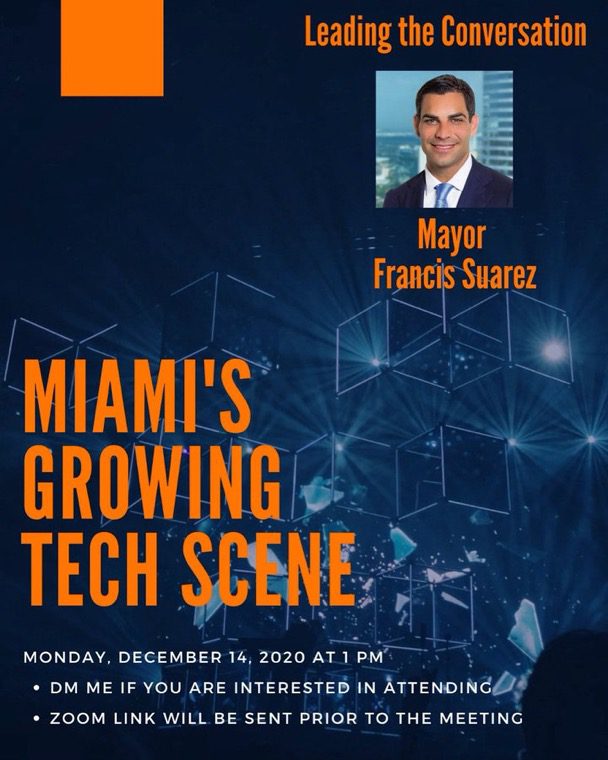 READ MORE: Why VC David Goldberg made the Miami move

Barron Channer is driving forward a campaign to bring out our generous spirit at the holidays (and beyond) to help those less fortunate. With the Twitter handle @TechLovesMiami, the real estate entrepreneur is reaching out to the tech community and encouraging us to share the #MiamiTech love -- and some cash. One current campaign is for donations toward helping our struggling residents pay their electric bills. I’m in. Tune in on Twitter – and help.

In other philanthropy news, Big Tech Loves Miami, too.  The Miami Foundation announced on Friday that Facebook invested $1 million to advance racial equity through the foundation's recently established Racial Equity Fund. It's part of  Facebook’s effort to support Black-led nonprofits combating systemic racism and inequity. “Facebook’s contribution helps build momentum and unlock serious charitable resources to push for system-level change in Greater Miami,” said Rebecca Fishman Lipsey, Miami Foundation's president and CEO, in a statement. “Systems of injustice are deep, far-reaching and multifaceted, so we need everyone united and working on solutions.” Find out more here.

3 Do the Sharks eat their veggies? We’ll find out

Peekaboo, we see you. Peekaboo Ice Cream, the first organic ice cream made with hidden veggies you can’t see or taste, will be airing tonight on Shark Tank. The founder is seeking an investment of $800,000 for 8% of the company.

Jessica Levison, CEO of the Miami-based company that is a certified B-Corp, also just won the grand prize in the Real California Milk Snackcelerator  competition, aiming to inspire innovation and development of the next great dairy snack.

The ice cream is available at eatpeekaboo.com, as well as Amazon and select Whole Foods stores. Tune in tonight at 8 p.m. to see if the Sharks take the bait. (Update: She got creamed. Though the Sharks lapped up the dessert, no deal. The adorable kids video she aired should drive up sales, though.)

This brand, with the mission of taking the bribery out of dinnertime fir parents everywhere, reminds me of another South Florida startup I wrote about years ago, called EasyPeasie, with its veggie mixes the founders say children will never detect in their foods. It’s still going strong, I’m happy to say.

New research from the University of Miami shows that more than half of Miami-Dade County’s affordable housing  lies below the region’s average elevation of seven feet above sea level.

This week, UM’s Office of Civic and Community Engagement at the University of Miami unveiled the newest iteration of its Miami Affordability Project (MAP) tool, which offers a data-driven way to identify areas of need for affordable housing investment. This free tool, developed with a $300,000 grant from JPMorgan Chase, visually demonstrates the impact of sea level rise on Miami’s housing market, particularly affordable housing. JPMorgan Chase also announced an additional grant of $500,000 to create The Climate and Equity Mapping Platform (CAMP) to build on MAP’s capabilities to address the next critical issue of concern: heat impacts and the need for safe and equitable access to outdoor spaces. To access the MAP tool, visit affordablehousing.miami.edu.

Thynk Global, the co-working startup located in Little Haiti that opened just before the pandemic arrrived, is moving on — to larger digs. Founded Maghan Morin and Jeanine Suah,  Thynk Global moved to temporary space near its original location while the company is building out its permanent space at 181 N.W. 71st St. Suah said the new facility, which will be ready in about 3 months, will have a social media room and a conference room. Read  our spotlight here. 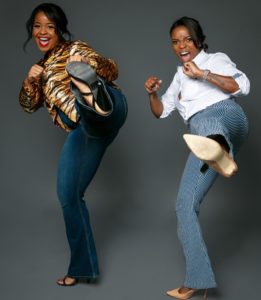 6 A double win for Shakeia Kegler of GovLia

On October 29, during the National Minority Supplier Development Council Conference & Business Opportunity Exchange and In partnership with New Voices Foundation, the NMSDC hosted a pitch competition for their Emerging Young Entrepreneur program. Kegler as the 1st place winner,for the Emerging Young Entrepreneurs Program, winner of a $10,000 Business Grant s and acceptance into the The Coca- Cola Company Accelerator Program.

“GovLia’s platform is live and businesses cane to sign up and create profiles, while we are working to gain partnerships with local governments, anchor institutions and prime contractions to make public procurement simple, equitable and more inclusive,” Kegler said. (Read more in our spotlight here.)

For two months, 50 Miami-Dade County Public Schools families have been receiving fresh greens and school supplies via Ford’s self-driving cars, a program begun about three years ago to test the autonomous vehicles, the Miami herald reported. It’s in partnership with  The Education Fund, a nonprofit that supports Miami-Dade Public Schools. Read more in the Miami Herald here.

8 Caribu is the apple in Tim Cook’s eye

Last but definitely not least, congratulations to Maxeme Tuchman and the team at ed-tech startup Caribu recognized by the Apple App Store as 1 of 15 apps and games that inspired the world in 2020. “I am so proud of our incredible team, without whom this award would not be possible, and we'll continue to work hard to make Caribu the best app for families to stay better connected during these trying times and beyond,” Tuchman said. Staying on our holiday theme here, It’s quite the top-off of a year of amazing growth (you can read all about it here) And to keep with our holiday theme going on here, check out its sale for the kids (and their parents) on your gift list.