“As companies like Papa grow, just continue to expose people to the quality of life down here, the relatively much cheaper cost of living, and show them businesses that can have huge impacts on society. An unfair advantage of this city is around healthcare, the fact that 10,000 boomers a day are retiring” – Alexis Ohanian, on #MiamiTech

An event just before the holidays doesn’t usually pack the house, but that’s not the case when VC Alexis Ohanian is the headliner.

Papa CEO Andrew Parker invited reddit co-founder Ohanian, also known as Serena’s husband, for a Q&A and meetup at The WeWork Security Building location in Miami on Thursday night. Ohanian’s Initialized Capital is an early and enthusiastic investor in Papa.

Papa Technologies, you’ll recall, has been on roll this year. The Y-Combinator and Miami-based startup that connects college students with senior citizens for tasks, transportation and companionship has been busy partnering up with health insurers  — Florida Blue, Humana and Aetna among them – which in turn offer the services free to their Medicare Advantage Plan members. In October, Papa raised $10 million in Series A funding.

“Hearing [Parker] pitch the vision for Papa, I was thinking how come no one has pitched this startup before? This is such a massive need and such a massive and vital industry,” Ohanian said. “But everyone in the Valley is still trying to solve the next problem for college kids starting a startup, they aren’t trying to solve problems for our senior population, and it is a huge blind spot.”

Ohanian shared stories of getting into the first class of Y-Combinator. “Now it is the most prestigious accelerator in the world, but then it was not a vision that had any kind of detail or planning other than at big picture and they were figuring it out as they were going along . Anything truly disruptive often in hindsight is described as a great master plan, but in reality day to day the founders are just figuring it out and getting it wrong and getting it right just enough times that it makes it all worth it.”

Jockey or the horse?

At Initialized, Ohanian said, “We really look for awesome founders, because there is not a lot of traction, there’s not a ton of product, but the product and market they are going after will tell you a lot about those founders. … And for any of us, when we find that founder or founders that can clearly consistently and compellingly tell us why this is a massive business opportunity, you get excited.” Parker, he said, stood apart because he understood the industry and opportunity with such depth and conviction.

What puts the tech in Florida tech?

“There needs to be — and there is not yet – a story around Florida Tech. There have been some amazing companies like Chewy and Fanatics but the story that is going to make Florida Tech Florida Rech needs to be a software-first  company that looks and feels a lot like an SF type startup in terms of scale and innovation …. that people say oh shit, that’s a Florida tech startup. And with that will come all kinds of expertise and wealth,” said Ohanian, who spends about a third of his time in Palm Beach County.

The world is shifting, with the steeply rising costs of living in San Francisco, LA or New York driving founders to build elsewhere. Investors too are finally beginning to look outside the Valley.

“As companies like Papa grow, just continue to expose people to the quality of life down here, the relatively much cheaper cost of living, and show them businesses that an have huge impacts on society,” Ohanian said.  “An unfair advantage of this city is around healthcare, the fact that 10,000 boomers a day are retiring.”

Will Olympia be a tennis star or a startup founder?

“I have tried to get Olympia to start programing, she’s 26 months, so she is good at mashing keys on the keyboard. As long as what she does makes her happy and isn’t illegal, that is a win. And I have to say she is super athletic. She moves. I can’t help but think those are my genes.”

New slogan: “Family on Demand” – got it. 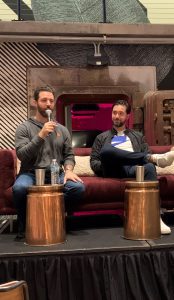 Parker revealed some news of his own. Papa will be expanding to support other age groups. “We recently transitioned from Grandkids on Demand to Family on Demand.”

And though many people think of Papa as a B2C company, it’s really not. It’s health insurance companies that are driving growth. Timing helps too: a recent change in the law makes this all possible.

Now with more than 50 employees, Papa has brought its engineering team in house. A number of them were at the event.

“We have 5,000 20-year-olds in the field [Papa Pals] with our app all day every day providing us feedback in real time,” Parker said. “The best way to build a business is to get feedback from users.”

Adds Ohanian: “Any startup that can be successful and genuinely argue why it is good for the world has an advantage now. That’s why companies like Papa and others will have advantage because they want to solve real problems.”

Alexis Ohanian will be back March 30-31 as a keynote speaker at  eMerge Americas in a conversation with Andrew Parker.

I am a writer, editor and a leader with extensive media experience and a passion for journalism and serving the community. Most of my career has been spent with the Miami Herald in business news, and my expertise is writing about entrepreneurs. I'm also good at research and project planning. I enjoy running community-focused projects and utilizing social media. Contact me at ndahlbergbiz@gmail.com

How to Get Your App Approved in the App Store

Joining a Startup: What You Need to Know Before Signing on the Dotted Line