Martin Claure, a serial entrepreneur and the founder and CEO of Aprende Institute, a Spanish-language online education platform focused on skills retraining, caught the entrepreneurship bug when he became one of the first hires at Brightstar, the wireless company that his brother, Marcelo Claure, founded and eventually sold to Softbank in 2014.

It’s safe to say entrepreneurship runs in the family. 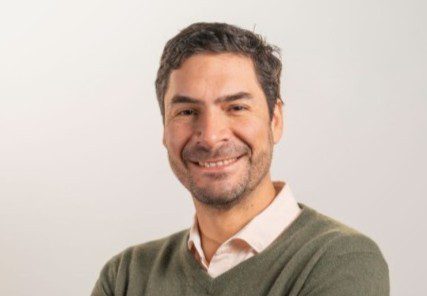 “I paid for business school by renting out apartments in and around the Northwestern campus,” said Martin, who has an MBA from the Kellogg School of Management at Northwestern University and a B.S. from Boston University. “Most people came out of their MBA in debt, but I came out with six figures in my bank account,” he said proudly of his salesmanship.

The brothers are originally from Bolivia and Martin moved to the U.S. for college.

Since his days at Brightstar, Martin has founded and sold a fintech in Peru and a lithium and cleantech ETF called LIT, which is still traded on the NYSE today. At the time of publication, LIT has roughly $1.5 billion in assets. (Bolivia holds 7% of the world’s lithium reserves. Lithium is used to make rechargeable batteries, including those used in cars like Tesla and in Elon Musk’s SpaceX endeavors). Martin was previously an angel investor with Miami Angels, an experience he credits with giving him a leg up on being an owner-operator because he’s had the chance to analyze hundreds of companies and their strategies. Martin declined to disclose how much he sold each business for.

With those ventures behind him, he was on the lookout for his next endeavor. He’s one of those entrepreneurs who is industry agnostic and is primarily focused on the size of the opportunity in front of him. He decided to start an online cooking school in Latin America which he called Gastronomica. I first met Martin in 2018 because he was interested in buying the assets of the class booking platform I built (Skillied) to host Gastronomica. To my dismay, the deal didn’t go through.

Once Gastronomica took off, Martin saw he could expand and rebrand the cooking school into something bigger. Aprende, founded in October 2019 and based in Miami, offers an array of online certifications and courses across five schools including Culinary Arts, Business & Entrepreneurship, Trade Skills, Beauty & Fashion, and Wellness. From how to open your desserts’ business to how to apply acrylic nails - it’s all there. The word “aprende” means “to learn” in both Spanish and Portuguese. But what really separates Aprende from the other online education platforms is the entrepreneurship component of the education. “We don’t just teach them [students] new skills, we teach them how to monetize them,” he said.

The truth is, while Aprende was up and running before the COVID-19 pandemic began, the need for remote learning and reskilling has been accelerated by a concern for public health and job losses, Martin said.

Aprende’s target market includes the U.S. Hispanic market as well as those in Latin America who can’t afford - or would rather not pursue - a 4-year degree, but who want to change careers and increase their earning potential. For many in Aprende’s target market, they don’t have time or resources to go to an in-person class across town. With Aprende, people can log into live classes or learn at their own pace - or both. If they have questions after class, they can chat with the instructor.

Initially, Martin hired a CEO to get things off the ground; he stepped in full-time in August 2019.

Aprende, which has grown by 6X, has 30,000 students currently enrolled in its courses, 200 full-time employees scattered across the U.S., Mexico, Colombia, and Argentina, and 200 full-time contractors, Martin said. The company uses a recurring revenue model where it charges students between $40 - $60 each month. Martin says they’ve analyzed their value proposition and found that “over 90% of Aprende Institute’s graduates report having experienced an improvement in their lives and 56% have generated additional income.”

In order to propel its growth, Aprende closed a Series A in October 2020 for $3.5 million, which was led by Reach Capital, a San Francisco-based VC fund that invests exclusively in Ed-Tech companies. Other notable investors include Marcelo and 500 Startups. This round brings the startup’s total funding - including a seed round in April 2020 for $1.7 million - to $5.2 million.

Martin, whose schooling (undergraduate and graduate) was in-person, acknowledges the added value of learning from your peers and said that with Aprende’s hybrid model of live and self-paced classes, students can interact, ask questions, and get to know each other, “We’re as close as it gets to in-person,” he said.