The conference, the largest ever with 12,000+ attendees, elevated Miami as a crypto hub.

What do skateboarding innovator Tony Hawk, Indy Car execs and other sports and entertainment celebrities have in common: They all came to Miami’s Bitcoin 2021 at the Mana Wynwood Convention Center to sing the praises of the digital currency with the aim of promoting widespread adoption. Alongside founders, developers, miners, institutional investors, politicians and even Mr. Wonderful, they were preaching to the choir at this conference, but they highlighted significant progress on many fronts.

Perhaps most significantly, the conference ended  with some potentially world-changing news: El Salvador is set to introduce legislation that will make it the world's first country to adopt Bitcoin as legal tender, alongside the U.S. dollar.

“Today a country chooses Bitcoin as a currency with a supply that cannot be controlled by any central bank. Today, humanity takes a leap forward instilling human freedom and financial inclusivity,” said Strike founder and CEO Jack Mallers (shown below) in the emotional announcement that closed the conference. “Today we celebrate the resiliency and strength of humanity.” 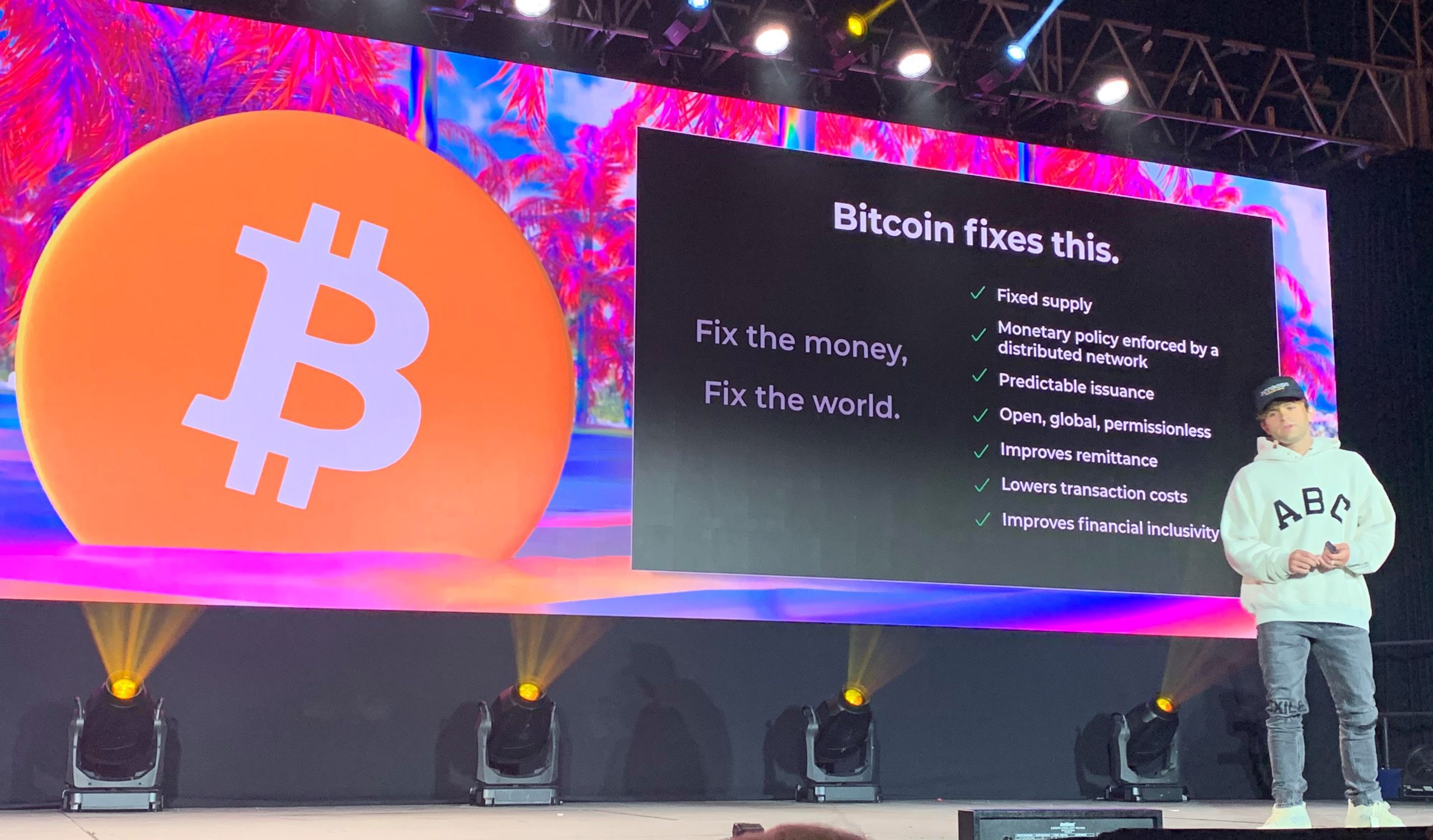 Mallers spent months working in El Salvador with his Strike team when they launched their mobile payments app there, and the president asked him to work together on a Bitcoin legal tender bill and plan for the country, Mallers said. There, as in other emerging markets, about 70% of the country is unbanked and the economy is largely depends on remittances, where services now charge up to 50% in fees, Mallers said. He told the crowd Strike is also announcing an open sourced “Bitcoin for Countries.

While there are still steps in the path to this approval, El Salvador has assembled Bitcoin leaders across the world to help build the new financial ecosystem with Bitcoin as the base layer. "It was an inevitability, but here already: the first country on track to make Bitcoin legal tender. Another milestone for Bitcoin and El Salvador. We're pleased to help El Salvador on its journey towards adoption of the Bitcoin Standard,” stated Adam Back, CEO of Blockstream, which plans to contribute technologies like Liquid and satellite infrastructure to make El Salvador a model for the world.

“What’s the significance? Well, it means Bitcoin would gain special status in banking systems globally. Banks would likely treat it as any other foreign currency. Bitcoin MAY get back-door favorable treatment under bank capital requirements. The knock-on effect of El Salvador’s announcement is that other countries may now follow,” said Caitlin Long, a conference speaker and founder of Avanti, a bank specializing in crypto currencies that is under development, as part of a Twitter thread.

To be sure, experts in the space say it is the emerging economies like El Salvador’s that are not only in dire need of a decentralized system and could be at the forefront of driving mass adoption. Ray Youssef, co-founder and CEO of Paxful and a conference speaker, made the point that it’s the emerging economies that are driving adoption of Bitcoin, based on their needs. Africa, he said, was the fastest growing as far as adoption, and Nigeria in particular has been building the infrastructure and running up adoption rates and is a country to watch.

Elevating Miami as a crypto hub

In all, the conference drew more than 150 speakers – including Jack Dorsey and Michael Saylor – and 12,000 attendees to Miami this week, but the impact went beyond the conference that wrapped up Saturday. In all, tens of thousands participated in the giant weeklong crypto celebration that included  satellite events hosted at the LAB Miami and beyond, NFT art auctions and openings, after-parties with Paris Hilton (sadly, that didn't come with my media pass) and much more. This New York Times story captures the spirit of the week’s events well.

All of this brought gobs of publicity for Miami – and Miami Mayor Francis Suarez’s campaign to make the Magic City “the Capital of Capital.”

Miami-Dade County Commissioner Daniela Cohen Higgins opened day 2 of the conference with a message of her own: “I’m here to tell you, you are already home. We are a community that came from nothing and started something. We support Bitcoin, we support cryptocurrencies, we support your industry.” Miami-Dade Mayor Daniela Levine Cava (pictured below) told the crowd that Miami-Dade County stands ready to help crypto entrepreneurs set up their businesses to thrive here. 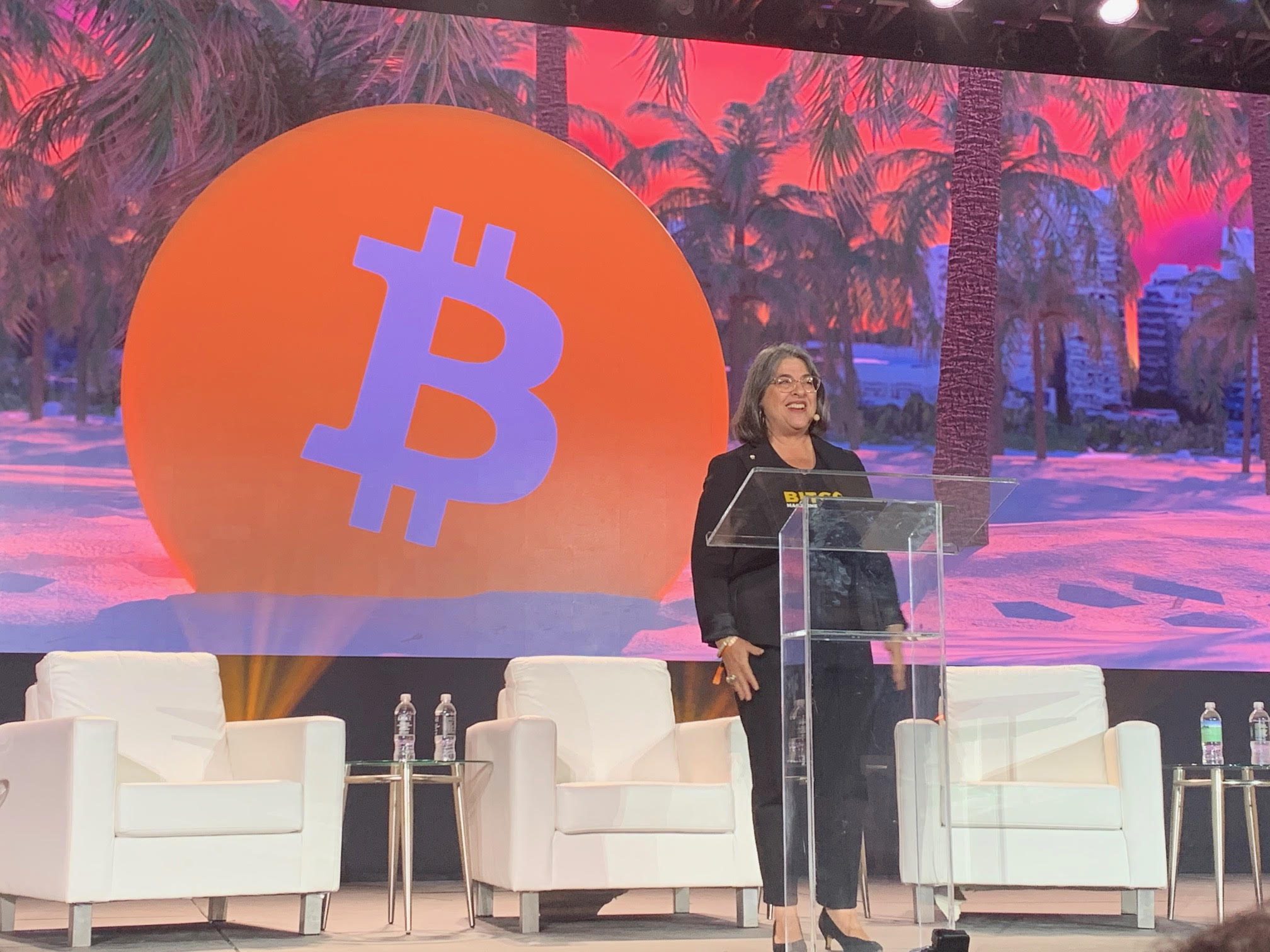 Once Suarez heard the conference was looking for a new host city for this year’s conference, he connected the organizers with Moishe Mana, the prominent Miami real estate developer and entrepreneur involved in helping to develop Miami into a tech hub,  to help make it happen.

“As Michael Saylor says, Bitcoin is digital energy. The energy created over the past three days was powerful. From panels on the moral case for Bitcoin, the digital network opportunity and macro level implications to relationships created on and off the venue, the conference demonstrates a clear inflection point for continued growth,” said Michelle Abbs, managing director of Mana Tech. “At Mana we are proud to have hosted the conference and look forward to bringing additional innovative events of this caliber.” 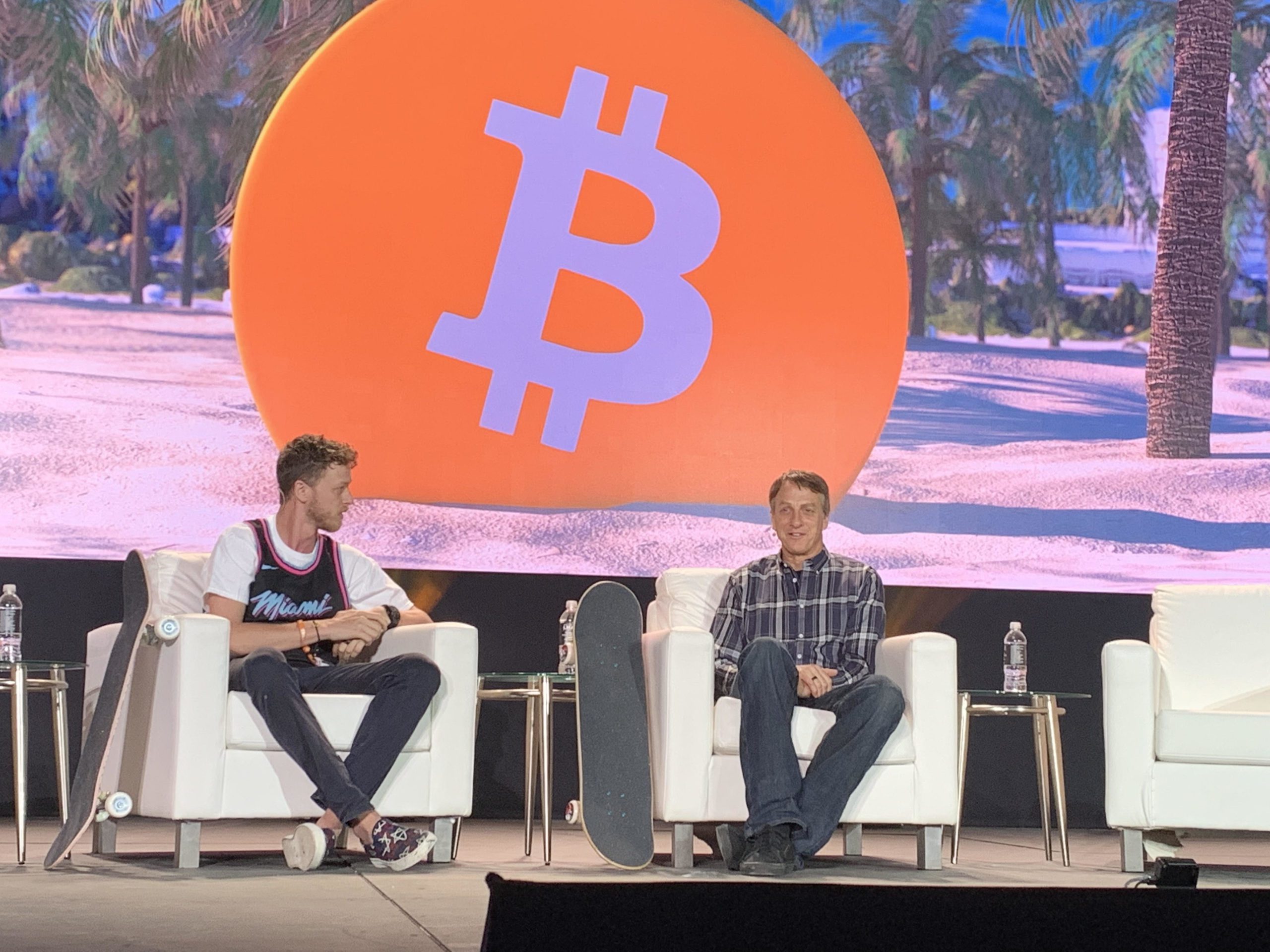 Tony Hawk: “If you do something you truly love, you’re not truly working.” His foundation funded 800 skateboard parks in underserved communities around the US and there is a push to build one in Miami, he says. That leads to his interviewer, Jeremy Gardner, pushing a campaign to donate for a Miami park right now at the conference. “Let’s build this in Miami!” 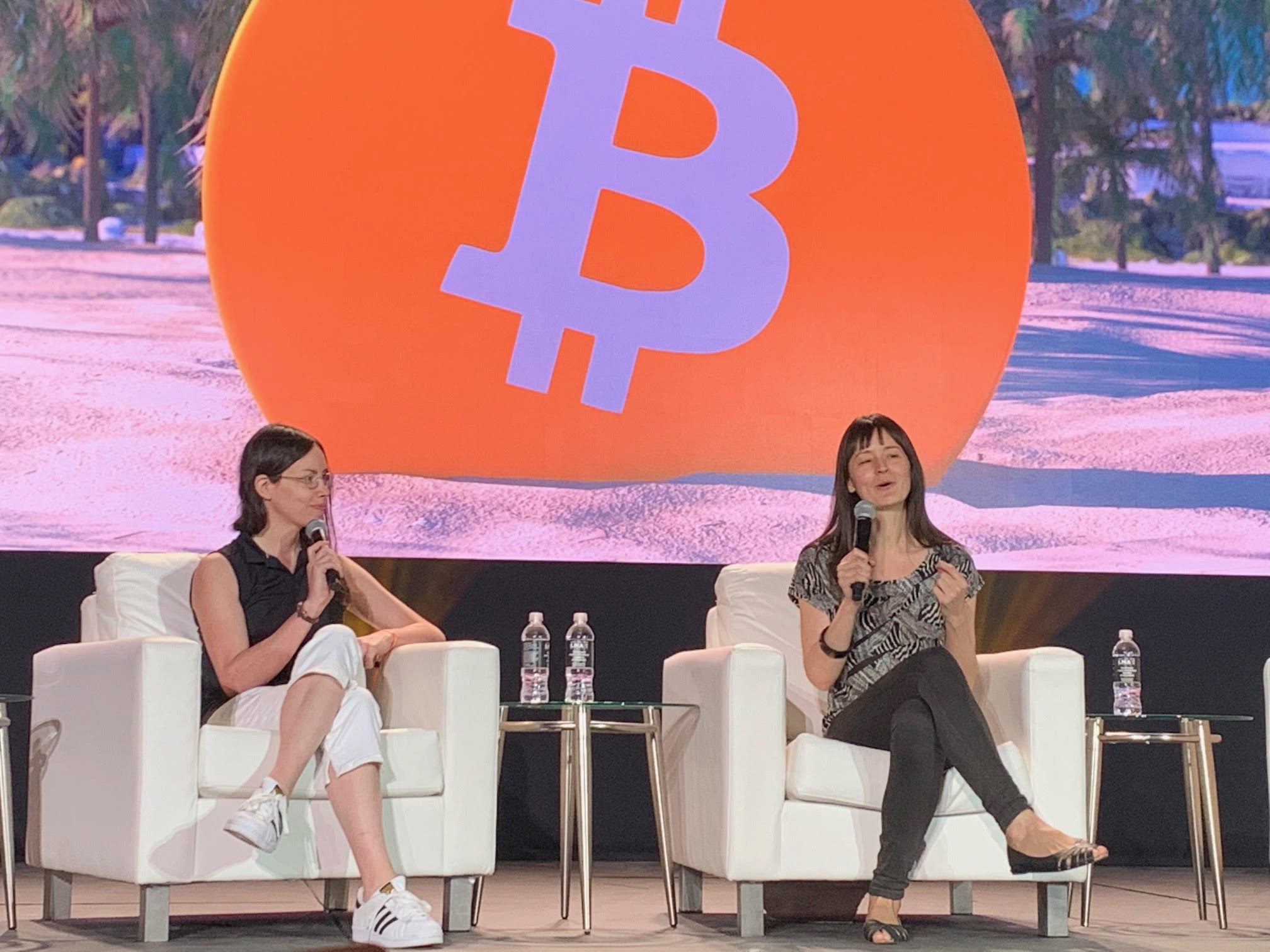 Bitcoin is more than “digital gold” – what’s more exciting is the monetary network and the network effect that has been growing stronger: Lightning Labs co-founder Elizabeth Stark and investment strategist Lyn Alden, and one of just a handful of women who spoke on the main stage. (Conference organizers: More women next year please.)

Mr. Wonderful, aka Kevin O'Leary,  in the house: He leads discussion about the business case for mining in "green energy." 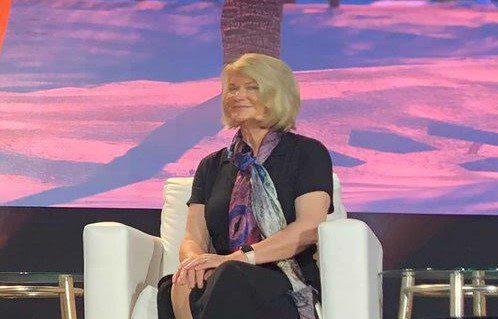 “Bitcoin is the most important commodity in the country, and that’s coming from  cattle rancher,” said Wisconsin Sen. Cynthia Lummis. “We’re hoping to get our colleagues productive on this issue because it’s not a partisan issue .. hopefully we will get something across the finish line in Congress.”

Laser eyes on Miami: Will the city become the capital of crypto?

Why is South Florida becoming a hub for FinTech?

Blockchain.com is moving to Miami and is promising a hiring spree