Bolt Mobility, a Miami-Beach-based electric scooter startup co-founded by Olympian Usain Bolt, announced that it closed a $30 million Series A funding round at a $100 million valuation. The round was led by Miami-based Rokk3r Fuel.

Bolt Mobility also announced that ED Welburn, GM’s former VP of global design, is joining the company as an advisor. 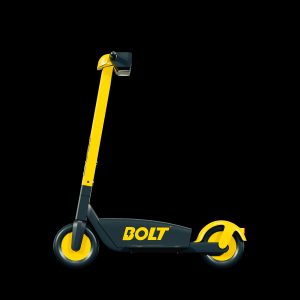 Bolt Mobility was founded in 2018 and is headed by CEO Julia Steyn, a former GM executive. In a crowded field fighting against competitors like Bird, Lime, Jump and others, Bolt provides personal e-scooters at strategic locations in urban areas that allow for point-to-point travel. “Bolt Mobility’s technology is sought after by forward-looking cities seeking to alleviate traffic congestion, helping municipalities transition infrastructure to a greener, more-efficient model,” the company said in its announcement.

Bolt’s strategy is to partner with cities, and it’s expanding as some of its well-funded competitors have been pulling back.  Bolt currently operates 5,000 scooters in Fort Lauderdale, Miami, Alexandria, Arlington, Richmond, Nashville, Atlanta, Portland and Paris and plans launches soon in more U.S. and European cities across, Axios reported.

“In securing Series A funding and bringing Ed Welburn on board as an advisor, Bolt Mobility is getting the resources and expertise it needs to both scale and advance our mission of bringing simple, efficient transport solutions to populations around the world,” said Steyn, in the announcement. “I’m very excited for these developments and the momentum they create for the immediate and long-term future.”