The Miami region cracks the top 30 in the global Startup Genome Ecosystem Report and ranks high for female founders.

For the first time, the Miami metro area has been included in the 2019 Startup Genome Ecosystem Report – and for its inaugural year, the region has cracked the organization’s top 30 ranking of startup ecosystems. Miami also ranked 7th globally – yes, No. 7 – for the number of female founders.

The report, released today, ranked numbers 26 to 30 alphabetically, where Miami fell, along with Atlanta, Barcelona, Dublin, and Munich. All five were new the list.

“We think there will be no 'next Silicon Valley.' Instead, there will be 30 'next' hubs, distributed around the world, reaching critical mass driven by either regional (e.g., Singapore in Southeast Asia) or Sub-Sector leadership (e.g., San Diego in Life Sciences),” the report said. Startup Genome is a research organization focused on ecosystem development.

On gender diversity, globally, only 17.2% of tech founders are female, the report found. “And, in none of the 80+ ecosystems we measured this for do women make up half of the founders. Perhaps more interestingly, only three ecosystems crack the top 10 in both female entrepreneurship and global performance: New York, Los Angeles, and Shanghai,” the report said. Chicago, not in the top 10, led the globe for female founders at more than 25%, the report said.

The Miami area, with 19% female-run startups, ranked No. 7 globally for this metric, the report said.

Overall, Startup Genome considers Miami a “Momentum Ecosystem.” Momentum ecosystems are those places that have never been part of the top global startup ecosystems since 2012 but have now cracked the top 30, the report said.

The report calls out ed-tech and life sciences as sub-sectors of strength in Miami.

"Miami's transformation over the last decade goes beyond the built environment. It's a story about people -- those who are choosing to build their lives here and the kinds of endeavors they are pursuing," Knight Foundation Miami Program Director Raul Moas said in the report.

Moas also served on the Startup Genome's advisory board, one of four advisors from North America. 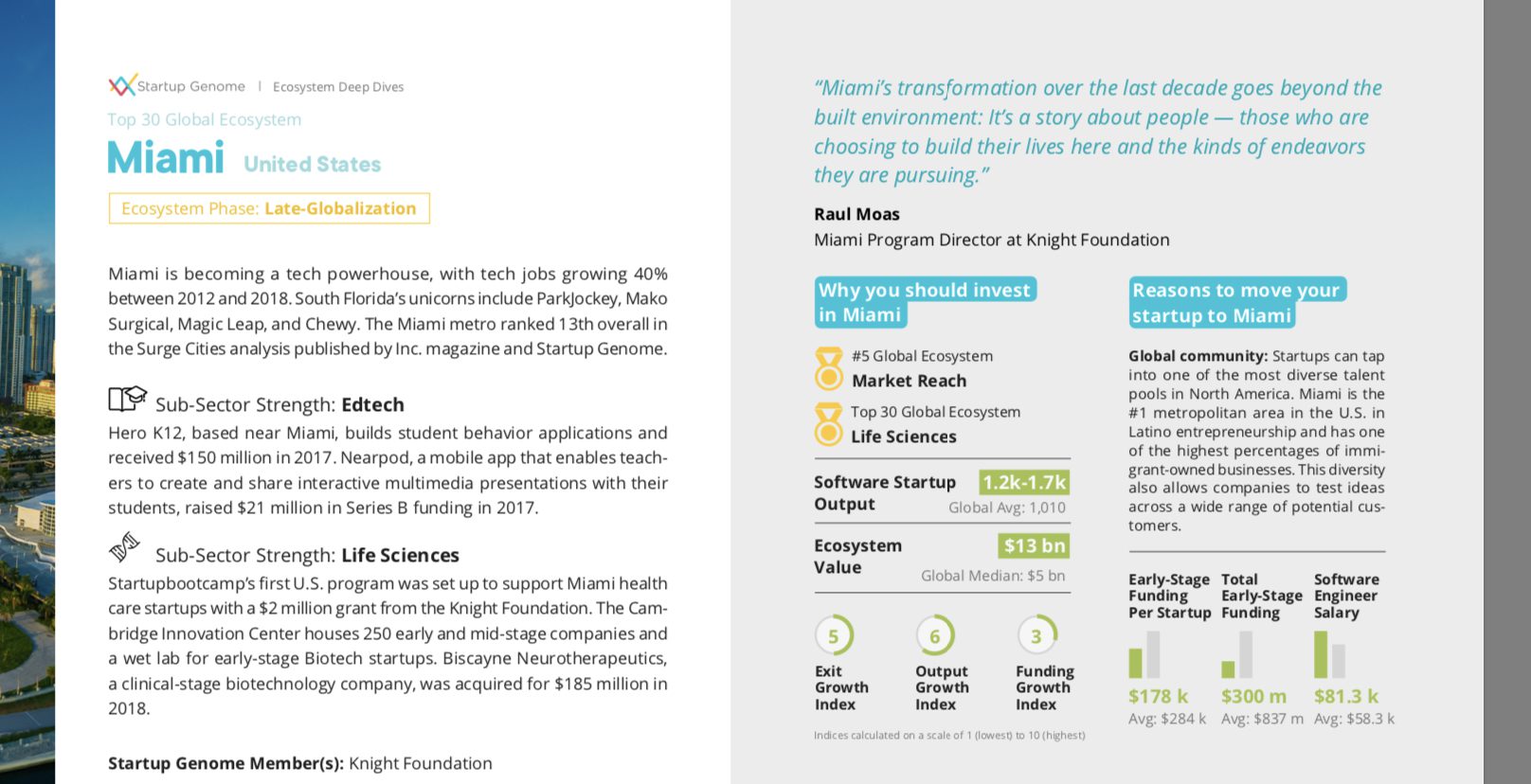 Notably, this isn't the first time Miami has been ranked globally. The Center for American Entrepreneurship recently ranked Miami No. 28 globally for venture capital in its Rise of the Global Startup City report, authored by Richard Florida and Ian Hathaway.

Globally, the Startup Genome report noted that 45% of startups created are now in sub-sectors of Deep Tech —like Life Sciences, Robotics, and AI, The four fastest growing sub-sectors among early stage companies are advanced manufacturing and robotics, blockchain, agtech and AI.

Presence And Confidence In A Virtual World

Dating in The Digital Age

Asana Presents The Power Of Planning: Working Proactively In The Reactive Age