Catching up with Boats Group: 110 hires and counting since anchoring in Miami

It’s been two years since Boats Group put down its anchor in Miami, moving its corporate headquarters from Norfolk, Va., to waterfront offices on Brickell.

“It’s a beautiful space,” said CEO Sam Fulton of its 23rd floor open-concept office at 1221 Brickell.  “Nothing like having some real world inspiration for the space you are working on every day.”

A big reason for the move is just as important today, Fulton said: to be closer to its customers. A quarter of Boats Group’s customers are in Florida, many of them in the Miami-Fort Lauderdale area, the largest boating market in the U.S.

Boats Group employs about 220 globally, including in the United Kingdom, Spain and Italy, but its base is Miami. About 40 percent of its employees are tech jobs, Fulton said. Some are in Barcelona and London but the primary tech hub is Miami, he said. Hiring has included software engineers, product managers and UX/UI specialists.

“We have been very pleased with the tech talent we have been able to attract in Brickell. A handful or roles are harder to fill than others, but in core areas like Java development, UX/UI and product people – that kind of talent has been readily available,” Fulton said.

Regarding future hiring, Fulton said, “we never turn the recruitment faucet off, and because our departments are ever-evolving, local networking with Miami professionals is constant. We want to know the area's top talent before we know our next need. So far in 2019, Boats Group has hired nearly 20 Miami-based employees. Not all have been new positions, but each person is making a difference in their role. At the pace in which we continue to grow, so will our hiring.”

When Fulton came aboard, the Boats Group brands needed modernizing. He was surprised that the brands did not even have native apps, for instance. Now Boat Trader does (4.8 stars), along with an upgraded shopping experience, including multifaceted search. YachtWorld will be getting the user experience upgrades and app soon.

The team also launched Brand Showroom on boats.com, allowing consumers a better experience for shopping for new boats. “While you can see plenty of new boats on YachtWorld and Boat Trader, they are known more for used boats. We didn’t have a brand for new boats, so we introduced Brand Showroom.”

Boat Group’s Brickell office was designed for bringing people together, with the common area having the best view. Nobody, not even Fulton, has an office and there are no assigned seats.

“The whole point of our office space is for communication and collaboration,” said Fulton. “We are looking for people that feed off that energy of being together and being part of a common cause. There’s Brickell Run Club every Tuesday night, and a good percentage of our population runs together (pictured at top of post). We have a pickup soccer team that there is a waiting list to sign up for it.”

To get more involved in the community and to promote a culture within, Boats Group gives employees 32 paid hours a year to work on charitable causes. It can be for charities or nonprofits of their choosing, and Boats Group also organizes a calendar of volunteer options. 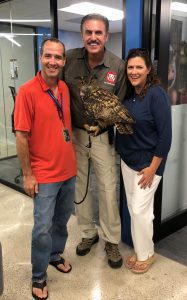 Boats Group Sam Fulton with ZooMiami's Ron Magill and Fulton's wife Chris. One of the Boats Group conference rooms is named after Magill.

Employees have fed the homeless, cleaned beaches and worked on school system projects. They have helped out the Overtown Youth Center, ZooMiami and the Humane Society, among others.

In 2018, its inaugural year for the charity program, employees worked 2,800 hours and the company is aiming for at least 3,200 this year, Fulton said. About half of those hours were in South Florida. “It was such a good feeling to be helpful in some of the causes we find locally.”

Adds Fulton: “We’re excited to be in Miami. There’s an energy associated with Brickell that is hard to replicate. Lots of other cities don’t have that.”