A Miami edtech startup that makes software to schedule study sessions has secured its first big partnership, opening the door to potentially earn millions of dollars from universities worldwide.

TEDU signed an agreement with the U.S.-based International Center for Supplemental Instruction, a consortium working with more than 1,500 universities. The accord gives discounts to the Center’s affiliates that adopt TEDU’s software that automates study-session scheduling and provides analytics showing areas where students often stumble and where curriculum may need changes.

The goal: to increase the efficiency of study-sessions to help raise student retention and graduation rates, thereby boosting state and private funding for universities and future earnings for students themselves, says co-founder Nicolo Bates, a recent University of Miami graduate.

“We decided to create our own class of product we call Learning Support System,” separate from tech systems that professors use to manage classrooms or administrators use for class registration, says Bates. “It’s a student-facing platform that lets students get study help any time of the day, when they need it.”

Jessica Brooks, incoming director for the International Center, says her nonprofit partnered with TEDU instead of other suitors, because the Miami venture has been pro-active, receptive to suggestions and acted quickly to meet its needs. TEDU’s software also connects with existing learning management systems at universities such as Blackboard and Canvas, easing integration and lowering costs for deployment. For instance, TEDU can pull class enrollment data to optimize study-session scheduling.

“TEDU is really action-oriented and asked us for feedback, allowing us as a customer to make tweaks,” Brooks told Refresh Miami. She expects the partnership will cut down on the time that university staff need for study-session scheduling and data analysis, freeing up time for the staff “to develop leaders.”

Bates came up with the idea for TEDU while studying late at night at the University of Miami. At the library, he recalls seeing a young man panicking. The student’s tutor had unexpectedly cancelled. The man had a test coming and nowhere to turn; the U’s tutoring center was closed. He worried he could lose his scholarship unless he performed well. Another time, a group of students were heading out to eat, but a woman bowed out, saying she couldn’t afford to join the others. Her friends left, and she broke down crying. Bates recognized the student might be able to make extra cash by tutoring peers, if only scheduling were easier.

“It made me realize none of the university’s [study-session] resources are really available to students at night, which is a predominant time for people studying,” says Bates.

Still, Bates didn’t immediately launch his venture. He had studied economics and finance and initially worked in that field. But as the child of entrepreneurs – his South Florida-born dad is a real-estate developer and his Italy-born mom has an interior design firm, he nurtured the idea of creating his own business and began talking to friends and investors about new tech to update out-of-class study.

After two years of market research, which underscored how much effective study sessions can keep students enrolled and boost school funding, he raised the seed capital for TEDU in 2018. His co-founder: Dmitry Osetrov, a young techie in New York who he’d met through a friend and who’s also passionate about modernizing education.

After Covid delays, the duo formally launched the company through a test program at California Polytechnic State University in January this year, serving thousands of students. This fall, it began testing the platform by scheduling group-study sessions for historically difficult classes at the University of Missouri-Kansas City, home to the International Center. Later, it will add private tutoring and other functions. And eventually, it will boost artificial intelligence and machine learning for greater efficiency.

“The idea is on the same platform, students can sign up for study-sessions for the classes they’re taking, or request a private tutor, meeting in person or digitally on Zoom,” says the 27-year-old Bates.

So far, TEDU has raised $3 million, all from Florida investors. It now employs 17 people, most in South Florida but some in Europe, Bates says.

Revenue is limited during initial trials, but TEDU expects to earn millions annually by licensing its platform to universities on multi-year contracts and by taking a share of funds paid to peer-to-peer tutors who use the site. It also aims to partner with academic publishers to provide them analytics on their textbooks, showing – for instance – what portions of their books consistently prove difficult for students and could use revision.

“Our dream is that no student will ever need tutoring, because the curriculums are so effective, backed by our data,” says Bates. “Data is going to be our biggest business driver.”

Bates says he’s well aware of data privacy concerns and will provide universities and other customers with hashed meta-information, not data searchable by student. He says the TEDU platform for peer-to-peer tutoring also should help increase personal safety for students seeking tutors, taking them off sites like Craigslist which do not vet tutors, track them or centralize feedback on those tutors.

“Covid exposed universities’ need to drive innovation,” says Bates. “TEDU and EDTech can take away mundane tasks, so they can focus on higher-quality activities.” 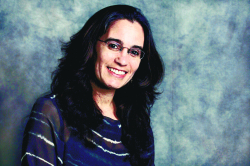 Doreen Hemlock
Doreen Hemlock is a journalist who worked years with the South Florida SunSentinel newspaper and before that, in the U.S. Virgin Islands, Peru, Venezuela and Puerto Rico. She holds an MBA from Columbia University, thanks in part to a Knight-Bagehot fellowship. Reach her at [email protected]