Getting Cities Moving at Pioneers @MDC 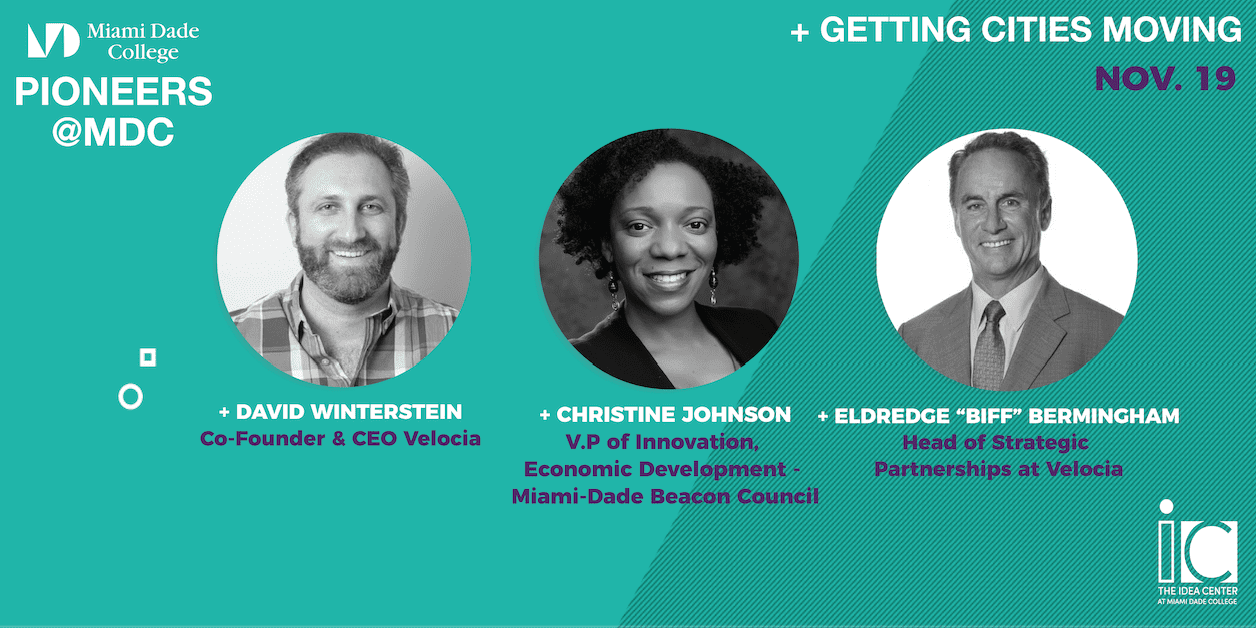 As Miami’s metropolitan area keeps growing in population, traffic is becoming more unbearable than it already is. Join us for a conversation with David Winterstein & Eldredge Bermingham from Velocia on how we can incentivize the use of public transportation in order to reduce traffic and pollution issues.

Urban mobility — how people and things in cities get from place to place — is in a state of great change. The challenge of getting around on time is becoming more complex and unfortunately, expensive. That is why organizations involved with transportation, such as ride-share companies, taxi services, urban planners and the government are being asked what is the best way to get more people to more locations faster. And most importantly, how do we incentivize people to choose modes that will help keep traffic flowing the best?

Velocia is a Toronto-based platform that rewards transportation choices by pairing its app with transit services, such as car sharing, bike sharing, taxi services, and even walking!

David Winterstein is an experienced leader in the Mobility & Tech industry, with a passion for all things mobility. This is his 3rd start-up in the mobility space; all centered around improving how people move around cities. Velocia is an open loyalty network for urban mobility, creating an ecosystem where users of mobility services can be rewarded by Mobility Service Providers and other Mobility Stakeholders for Smart Mobility behaviors related to their daily commutes. Prior to founding Velocia, David was the General Manager of the carpooling app, BlancRide, and Strategic Advisor to Nekso, a LATAM taxi-hailing application. Nekso was recently selected by taxi companies and unions in Mexico as their application of choice. David started his career in Finance, working for 9 years across HR Strategy and Commercial and Corporate Banking with BMO Bank of Montreal. David earned his Bachelor of Commerce Degree from Ryerson University and his Executive MBA from NorthWestern University.

Eldredge focuses attention on the role that cities and their citizens play in advancing society and prosperity. He is particularly interested in the global leadership potential of Miami and south Florida. As the geographic pivot point between the United States, Latin America and the Caribbean, Miami will increasingly draw on its intellectual and cultural diversity to accelerate the solution of urban pressure points in mobility, health, education, the environment, financial inclusion, etc.

Eldredge was the founding Chief Science Officer for the Frost Science Museum in Miami from 2014-2017. From 1989-2013 he was a Smithsonian scientist, and for seven years served as Director of the Smithsonian Tropical Research Institute, a leading global center for the study of biological diversity. He has published more than 250 peer-reviewed articles and edited the book, “Tropical Rainforests: Past, Present and Future.” Eldredge earned his BS degree from Cornell University and a PhD in genetics from the University of Georgia.

As VP of Innovation Economic Development for the Miami-Dade Beacon Council, Christine Johnson is charged with leading recruitment, retention, and expansion efforts for the technology sector, in addition to establishing an overall entrepreneurial and innovation strategy. With almost 20 years of experience developing entrepreneurial ecosystems, Christine understands the importance of leveraging resources and brokering strategic relationships to foster a community’s growth. Her impact on Miami-Dade’s innovation ecosystem has been palpable, driving inclusion and thought-leadership not only through The Beacon Council but via participation in, among others, the Miami Downtown Development Authority (DDA) Technology Advisory Group, Miami Dade College Center for Economic Education, and previously with the Vizcaya Museum’s Technology Advisory Committee.