Half a world away, Miami-based DermaSensor goes to market with its innovative skin cancer detection device

After a decade of development, DermaSensor announced the commercial launch of its medical device in its first two markets – Australia and New Zealand. Its point and click skin cancer detection tool for primary care providers is the first of its kind, the Miami-based health-tech company said.

In a related milestone on its road to commercialization, DermaSensor said it received CE Mark approval in the European Union. This gives the company the ability to market the device in Europe, once the company is ready to tackle those markets.

With the device, a physician can gently touch the non-invasive device tip to a lesion, and a spectral sensor records how dozens of wavelengths of light reflect off cells beneath the surface of the skin. A proprietary algorithm, harnessing the power of machine learning, instantly analyzes the light and, in less than 30 seconds, provides a “Higher Risk” or “Lower Risk” result. 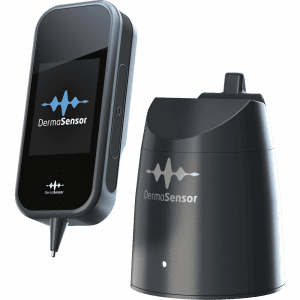 Cody Simmons, DermaSensor’s CEO, said there are about 8 million new skin cancer cases each year globally and about two-thirds of skin issues are first evaluated by non-specialists. The startup’s work is all about improving access to effective skin cancer checks.

“If the world’s millions of primary care physicians were equipped with an easy to use, low-cost tool that helped them better assess skin cancer, we believe that tens of thousands of lives could be saved each year, since nearly all skin cancer is curable if detected early,” he said.

DermaSensor is launching first in Australia and New Zealand. Why those countries for its initial rollout? The need is huge.

“Just to give you a comparison, two out of three people in Australia get skin cancer in their lifetime. In the U.S., it’s one out of five and in Europe the rates are similar,” Simmons said in an interview with Refresh Miami. “Obviously skin cancer is a major issue in all these areas, but the problem is particularly acute in Australia and New Zealand.”

DermaSensor plans to launch in the European Union sometime next year, once it gets its supply chain and personnel set up. The U.S. market is further off; DermaSensor still needs to complete a pivotal study and apply for FDA clearance.

For a decade, DermaSensor has been working on developing and then miniaturizing the product from a 30-pound microwave-sized box to a one pound hand-held device. In June, the company announced it raised $11.5 million in a Series A financing. In total the company has raised $17 million to bring the first product to market.

DermaSensor today is a team of 11 plus contractors. Simmons worked in Silicon Valley at Genentech and a couple of health-tech startups before joining DermaSensor in 2016 as CEO. He was brought on by Maurice Ferré, the medical device industry veteran who grew and sold Mako Surgical, co-founded and invested in DermaSensor and is now heading Inightec. DermaSensor’s patented technology was pioneered at Boston University and University College London.

More than $10 million has gone into developing the device, said Simmons.

“It’s been a long road, a longer road and more time and money spent than planned. Hardware is hard, as they say, and unfortunately we were not an exception to that,” he said. “But we gotten over the finish line in a few countries abroad, and we’re excited about what’s ahead.”

#WIT | How to foster the presence of women in the tech industry?

🌍 #WIT | How to foster the presence of women in the tech industry?

Women in tech: How women have helped change the industry

Kick-Start Your Career in Design

Onboarding New Hires: How to Get Them Quickly Up to Speed, Engaged and Productive