It is with great sadness that I write this. The Miami Tech community lost one of its own on Sunday, March 28. Aaron Hirschhorn, founder of DogVacay and Gallant, investor and friend, lost his life in a boating accident. Aaron leaves behind a wonderful wife and three beautiful children.

I first met Aaron in September 2018 after he and his family had recently moved to Miami. I asked him to share his experience launching and growing DogVacay with the Miami Tech community and he was happy to do so. He gave this talk just two short years ago to a packed room.

Over the two years that would follow, Aaron and I would meet often to discuss two of our mutual passions - animals and startups. Just last month we met for coffee to update each other on what we were working on. Two weeks ago he texted to congratulate me on my new role at Florida Funders. That was Aaron - always supportive, finding time to cheer you on and share in your wins. That was my last conversation with him.

To know Aaron was to love him. He gave of his time selflessly, always eager to help others in the community. While Aaron may no longer be with us, his memory and impact on this community live on. During Aaron's funeral last week, his wife Karine put it best -- "Because of him, we are all better." 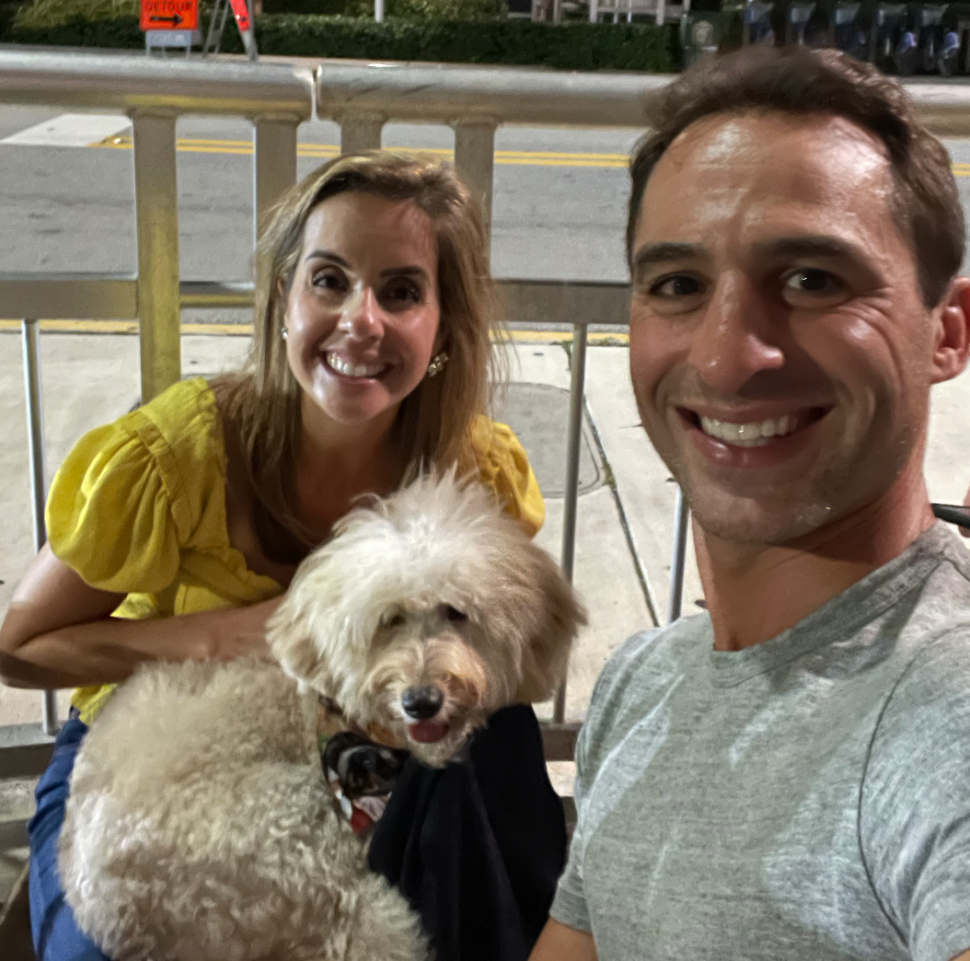 Below are just a few stories from the many #MiamiTech lives he touched:

“I first met Aaron when he moved with his family to Miami a few years ago. I was thrilled to host him alongside Refresh Miami at a networking event to share his successful entrepreneurial journey with the Miami Tech community. He left an undeniable impression on everyone that evening back in early 2019. I remember how passionate he was in telling the story about how he and his wife built DogVacay. He was energetic, genuine, and funny as he shared such incredible insights with a captive audience. I knew from that moment that Miami was incredibly lucky to have him as part of our community and we definitely were very lucky. He happily contributed his time supporting our entrepreneurial efforts at eMerge Americas participating as a thought leader at pitch competitions and connecting with entrepreneurs. The last time I saw him was a short two weeks ago when we met for breakfast. He shared his big plans and we were excited to continue to collaborate. He was happy, energized and his face lit up talking about his wife and kids. My heart breaks for his family. Aaron’s passing is a huge loss for not only the Miami Tech community, but for everyone who was fortunate enough to meet him.”

“I first met Aaron when he moved from LA to Miami, I had a feeling we would be friends. Hirschhorn was the last name my family had when they lived in Poland before the first world war, we discussed the possibility of being distant cousins, he certainly felt like family.

Aaron was a burning light of a man, intensely positive and behind his big shining smile was pragmatism. In business he was to the point immediately, ‘let’s get it done dude’, he would say, ‘I love it!’. He was not scared of conflict to get to the point, and I loved him for that, you knew where you were with Aaron, that was for sure.

He took up tennis during lockdown and was determined, as he was with everything, to beat me. He did not, but I know he would have done it, he told me the last time we met for an early evening cocktail that since his defeat he had taken five lessons to improve his serve. ‘You know I am going to beat you James…….yes, I have a feeling you will!’

For those who might question why Aaron was so good at everything he did, therein lies the answer. He had a brilliant mind, a positive attitude and natural talent……but most of all he worked like mad to be the best. The best husband, son, family man, entrepreneur, leader and friend.

Aaron was a great man, we all miss him terribly but I can hear his voice still telling anyone who wants to listen to be positive, get on and live, love and build.”

“When I heard the news of Aaron’s passing, I reached out to a few others who knew him to process the shocking news. Every single person had a story of how Aaron helped them or somehow brought them joy. Incredibly successful, talented, smart, and humble, yet always had time for others. That was Aaron. Our Miami tech community will always remember him and the example he gave us.”

“I had the pleasure of being an early DogVacay employee and worked closely with Aaron to scale the company on what can only be described as a wild ride. Despite typical startup struggles, Aaron was always a source of positivity and enthusiasm. He was an inspirational leader, empathetic manager, and a great friend. I'm grateful to Refresh Miami for giving me the chance to reconnect with Aaron recently in Florida and he will be remembered for the impact he made in both the Silicon Beach and Miami tech scenes.”

“I met Aaron years ago in Los Angeles at a party. We bonded over the Eagles and the fact we went to rival high schools in Philadelphia.  He was there with his young family and his energy was infectious. Fast forward a few years, he's the first person to seek me out when I land in Miami.  We had lunch a few days before his passing, and he was beaming from ear to ear about his life choices and his happiness here.  His wife, Karine, had family that was local, his kids were thriving, he was helping local entrepreneurs, he was growing Gallant, and he was enjoying being outdoors on the water.  The same night, I bumped into him at a tech mixer and he was clearly the belle of the ball. Everyone loved Aaron, everyone had peace when with him, and he was always gracious with his time, advice, and energy.   He'll be sorely missed by so many.”

“I met Aaron recently in connection with building a tech pet healthcare platform. He wanted to lead the platform because he had compassion. He loved the vision. I was extremely impressed by his energy and his genuine approach. Indeed we lost a great human being, a friend and a man who desired to impact the world. May his soul rest in peace and reach its destination fast.”

“I met Aaron only recently, but from the first moment I knew he was a great person.  In a matter of weeks, if not days, he joined the MiamiTechLife community and immediately made friends. I could see how much he loved his family and proud he was of his work as an entrepreneur.  He was now in the unique situation of paying it forward and started to do so.  He invested in my company after a short conversation and was planning to support many more entrepreneurs from Miami.

He quickly became famous in our community as he generously offered to take his newfound friends, including myself, on his boat so they can learn how to eFoil.  His passion for the water was contagious, and I later learned that it was something he discovered later in life.  It is so painful to think that an accident in that same water would later take his life.  As I talked to someone that also knew him, we discussed how death is imminent for all of us, but in this case, there may be some comfort in knowing that his spirit was one with the universe as he enjoyed the water, probably with friends.  I will forever see Aaron’s big smile as he glides through the water.  I will never forget him as our common respect, admiration and love for him brought us the best of MiamiTechLife and turned our community into a family.  We will be here for his.”

“Aaron was someone that I was starting to get to know better, through active sports as well as conversations about funding in Miami. He was such a present and generous person, and it was palpable in how we gave of his energy and his space.

I co-manage a group on Whatsapp for tech and startup folks interested in watersports. There are a variety of people in the group that kitesurf, boat, paddleboard, etc. Aaron had kindly offered to host us in batches at his house over a period of several weeks to take lessons. He was just so happy to share his love of water and adventure with others in a way that builds community and it was palpable that he effectively invited a group of strangers to his home to take them out on the water. It’s a rarity for people to not just take such joy and satisfaction from how they live their life, but to also layer on that a desire to teach, share, and bring others along - it was a remarkable trait.”

“It’s not often you meet someone and you feel like you have known them for 20 years, but that’s what it’s like when you meet Aaron Hirshhorn. He instantly made you feel comfortable and truly interested in what you had to say. I’ve only know Aaron for less than a year, but in that time I saw how many people truly loved him and that love extended out to his whole network. In just a few short months I learned so much from Aaron about being a father, husband, friend, entrepreneur, investor and advisor as every conversation always had some actionable lesson or impact on each of us. His love for his wife Karine and 3 kids was the example to follow. He always did what he said he was going to do and that made you want to always do the same. He just make everyone around him better humans and that’s exactly what this world needs right now. While Aaron is no longer here in physical form, I truly believe that his impact and energy lives on in all us whom he passed it on to, for us to help make our networks and  communities stronger and more impactful.  We’ll miss you Aaron and will carry your torch on forever.”

“Aaron never had too much of a reason to meet with me after a mutual professional connection told me that him and his family had recently moved down to Miami a few years ago. I would come to later find out just a few weeks ago, when he was helping me out yet again with my fundraising deck, that he didn’t really know that acquaintance too well. His advice was great and the relationship we developed, although young, was even better.

It was a genuine, no-bullshit one - filled with candidness, interesting conversations, and a ton of texts and reschedules coordinated beautifully via text.

We would come to check in with one another and he was never inconvenienced, always accessible, and generous with his time and advice - which was double impactful as he was a young, very successful entrepreneur, early adopter, and family-man whose time was cut too short.

Aaron will always hold a special place in my and I’m sure many other #miamitech hearts.”

Maria Derchi Russo
Maria Derchi Russo has served as the Executive Director of Refresh Miami since 2015. She also serves as Director of Community for Florida Funders and is the founder of Women in Miami Tech. A Miami-native, Maria is passionate about all thing #MiamiTech.