Macro economic indicators may be signaling a possible downturn and venture pullback ahead, but the mood at the 2020 Florida Venture Capital Conference in Orlando this week was decidedly bullish. And why wouldn’t it be? The Sunshine State just came off a record-setting year for venture capital.

“2019 was an outstanding year for venture in Florida, with a healthy funding landscape showing strong momentum statewide,” said Kevin Burgoyne, President and CEO of the  Florida Venture Forum, which produces the annual conference. Some of the attending investors said that deal flow from the state has been strong and they anticipate a busy year ahead.

The Forum, Florida’s largest statewide support organization for investors and entrepreneurs now in its 36th year, released its second annual Florida Venture Report at its conference, which took place this week at the JW Marriott Grande Lakes in Orlando. 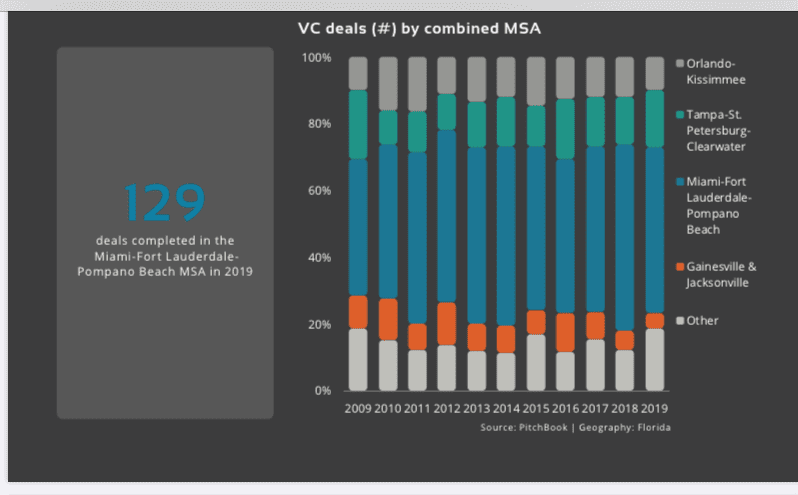 Here are a few highlights of the report, produced in partnership with Pitchbook. You can see the full report here.

The Forum said it will continue issuing statewide venture reports, as well as continuing to track the funding progress of companies that present at its conferences. Since its founding in 1984, over 1,200 companies have presented at various Forum events and conferences, and past Forum presenters have gone on to raise $6.3 billion in equity capital, said Travis Milks, Managing Partner of Stonehenge Growth Equity Partners and Chair of Florida Venture Forum’s board.

That’s something that Forum attendees were celebrating, too — a stronger ecosystem of companies based in Florida. And some of those past presenters who have raised large sums and grown quickly – including Reef Technology, Fattmerchant and Neocis, were in the spotlight at the conference. Sixteen other ventures from around the state hoped to be part of those statistics in the future. They presented their companies with six minute pitches and then were questioned by panels of investors. Those presenting companies included Vigilant Biosciences, Intercept Telemed, RSPECT Sports Tech and Nuvola from South Florida.

Suneera Madhani, founder and CEO of Orlando-based Fattmerchant and daughter of Pakistani immigrants, called herself a reluctant entrepreneur. But while working in the payments industry, she was appalled by the poor customer experience and knew there had to be a better way for payment processing through a subscription. With much encouragement but just $20,000 in the bank, she took the entrepreneurial leap in 2014  because it was the right time, right place and right space. “We did $5 million in payments our first year and we did $5 billion in payments last year,” she told the crowd

Fattmercant employs 110 now, but Madhani told the story about how in the very early days she used multiple variations of her first name answering calls to appear to be a bigger company than they were. To this day, the team still celebrates the wins as they gain customers. Fattmerchant, which presented at FVCC in 2017, has raised nearly $20 million, a journey starting out with investments from Florida’s Arsenol, FanFund and Venvelo. [Read more about her story on Refresh.]

REEF Technology (formerly ParkJockey, a FVCC presenter in 2015)  has been in the news lately for its unveiling of its REEF Kitchens – and for reeling in the state’s largest venture investment. Last year, the company rebranded because the company had become the largest operator of parking lots and garages in North America with 5,000 locations. “We had a vision that is now being executed to take those parking facilities, and in addition to using them as a place to just put your car, to recognize they are great high density locations near where lots of people live and work. We imagined new use cases for that real estate,” said Alan Cohen, CMO of Reef.

One of those early use cases: Delivery-only kitchens for up to five restaurants to plug right into REEF’s infrastructure. “We are having a lot of discussions with regional companies, large national chains and mom and pops because everyone sees and opportunity,” Cohen said. Another early use case is for creating distribution facilities for trucks for last-mile deliveries, rather than the trucks clogging city streets, he told the audience.

“We look at the parking lot as an open playing field – today we think its distribution centers, charging stations, kitchens, but in the future who knows?” For example, he said REEF is in discussions with an Israeli emergency services organization that wants to expand into the U.S. “There are a lot of possibilities we are excited about.” [Read more about REEF on Refresh.]

Neocis, the Miami robotics company that raised $30 million in venture capital, manufactures robotic surgery systems focused on the dental implant industry, providing a minimally invasive procedure that can lead to faster healing and less pain for the patient, CEO and co-founder Alon Mozes told the crowd. “Dental implants is a huge market and most importantly the clinical value this kind of robotic surgery brings is very advantageous to this kind of procedure.”

Mozes credits patients and a lot of scrappy efforts in the early days for its success. Networking connections were critical. An early advisor connected him with the Beacon Council, which gave the startup advice on tax breaks for R&D and manufacturing. Beacon Council connected Mozes with Pipeline for office space. Through networking with the Florida Venture Forum – Mozes presented at the conferences twice – he also met his first attorney John Igoe. An early believer and investor was Fred Moll, known as the father of robotic surgery, and that brought other interest. Since then Neocis has brought in institutional investors. “Put yourself out there and network as much as possible,” he said.

Neocis is now in its commercialization phase. More than 40 Neocis robots are now placed around the country. “We did more than 1,000 implants in 2019 alone.” What could be next: There is potential in other indications, perhaps making Neocis a platform play, Mozes said. “Your robot will never be in a bad mood, they will never wake up and be groggy, they will be very consistent and deliver the best care every time.” [Read more about Neocis on Refresh]

Hoping to attract the attention of some of the 120 or so venture investors in the room, 16 startups from around the state presented to the audience. These South Florida companies made presentations:

Conference attendees, like myself, who weren’t looking forward to the drive back to South Florida, might take comfort in what luncheon speaker Patrick Goddard, CEO of Brightline, had to say. The speedy trip to Orlando via Brightline should be reality by the end of 2022. For those heading west, a route from Orlando to Tampa, perhaps with a stop at Disney World, is still in the plans but with contractual deals still to be sealed, it is too early to make any predictions on that one.