In the ‘70s and ‘80s, IBM’s research & development campus in Boca Raton bustled with innovation.

The huge office building housed several firsts, most notably as the place where the world first personal computer was invented by Philip “Don” Estridge and his IBM team and introduced to the world in 1981.

It was also home to the first smartphone, Simon, and it was said to be the place where Bill Gates made his notorious licensing deal, licensing his operating system to IBM instead of selling it to them so he could license it to others and become Microsoft. The building itself, featuring a Y-shaped design by architect Marcel Breuer, was considered an engineering marvel for its day when it opened in 1970 and was designed to withstand a Cat-5.

That’s what made the purchase of the office complex in 2018 so special, said Giana Pacinelli, marketing director of Crocker Partners, a commercial real estate company headquartered in Boca Raton. Last April, Crocker purchased the 1.7 million square foot property, which had been expanded over the years and had changed hands a couple of times since IBM sold the property in 1996.

It’s now called BRIC, the Boca Raton Innovation Campus, and it is housing the new generation of innovators.

“Our goal is to take that past and bring it into the future so the campus continues to be a place where innovation happens,” said Pacinelli, adding that the giant office park is now home to 36 companies and organizations, including corporate and regional headquarters.

“We want to make it a destination, not just for the organizations that work on the campus but a destination for the entire community to enjoy, which is why we are partnering with Palm Beach Tech. We are hosting a lot of programming on campus. We have a program board of 11 community leaders that helps us put together programs. We partner with TedX Boca Raton to do speaking events on campus.”

Over the next year or so, BRIC’s Amenity Corridor will undergo a $28 million renovation. The renovated section will include a STEAM Lab equipped with 3D printers, laser cutters and other equipment. Tenants can rent it out and BRIC will also house programming there for local organizations and schools. Hungry? There will be a food hall with seven restaurants open to the public and a 1,200-seat dining hall that can also serve as a presentation hall. Also planned is a wellness center with an onsite nurse, two coffee shops and a co-working space. “It’s exciting times for us,” Pacinelli said. 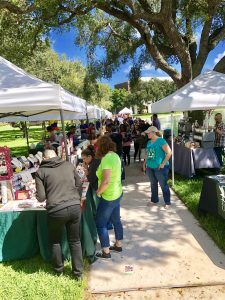 Already, there are miles of walking and bike paths, a conference center that can seat up to 400 where events are now held and a fitness center tenants can use.

Health-tech company Modernizing Medicine relocated its headquarters – and its more than 800 employees – to a 100,000 square foot space in BRIC in January. "We’re connecting the innovation of the past with the innovation of today. This is a building where people had the freedom and capacity to think big about the future,” CEO Dan Cane said in announcing the move. BRIC is also home to MobileHelp, MDVIP, Transunion, BlueGreen Vacations and Shoes for Crews, among others. “We are the largest single office facility in the stat,” said Pacinelli.

“The property, when IBM housed it, was a very closed off, very secretive space, but now we want to open it up to the community.”

This post was written for Palm Beach Tech and is being republished with permission. Photos are courtesy of BRIC.