'The mayor and his team are working hard to turn the avalanche of press into bold startups that grow, thrive and create more jobs' - Melissa Krinzman

Miami investor and entrepreneur Melissa Krinzman will be the City of Miami’s VC-in-Residence. She and a new city team called Venture Miami “will steer the course of the Miami tech movement,” Miami Mayor Francis Suarez announced.

The mayor appointed Krinzman to surface, connect and accelerate Miami's tech community. She will work closely with high-growth founders, investors and community leaders to help catapult them to success and strengthen the community at large. Krinzman will be "a strong part of our efforts to grow this Miami movement," the mayor said today. The one-year appointment is supported by the Knight Foundation.

The Venture Miami office will be headed by Saif Ishoof, FIU’s VP of Engagement and Miami's unoffical "connector-in-chief" who was recently appointed as the mayor’s Senior Advisor for Innovation and Technology. The City of Miami’s CIO Mike Sarasti is also part of the Venture Miami leadership team, and Krinzman will be working with them. 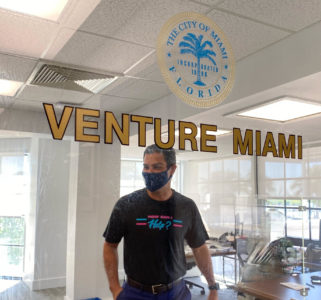 Since 2014, Krinzman (pictured above) has been managing partner of Krillian Ventures, an early-stage Miami-based venture firm  specializing in fintech, proptech and healthtech. Co-founded with Jeffrey Miller, Krillion has funded a couple dozen startups, many of them from South Florida. Before that, she launched Venture Architects in 1998 in New York City, advising over 1,000 startups and helping them raise over a billion in capital, and earlier in her career worked in the non-profit sector.

Krinzman, who was born and raised in Miami,  is currently on the board of Miami Angels, South Florida’s largest angel network, and is active in other community-building and philanthropic endeavors. Last year she and ed-tech entrepreneur Jamie Nacht Farrell ran SWOT305, a Knight-funded pop-up initiative to help startup founders navigate the pandemic crisis with one-to-one coaching and support.

The time for a Venture Miami initiative is now, said Krinzman.

“I told someone the other day that early-stage investing is a people business and that Miami has always had great people but not critical mass. Our critical mass is now arriving everyday thanks to an earnest ‘how can I help’ tweet by Mayor Suarez and his vision to extend the moment into a movement,”  Krinzman said in an interview. “The mayor and his team are working hard to turn the avalanche of press into bold startups that grow, thrive and create more jobs.”

It’s been hard to miss – more than 220 investors and founders have poured into the Greater Miami area in the past couple of months, many of them inspired by the mayor’s seemingly 24/7 social media interactions and welcoming cafecito invitations. News developments such as Blackstone Group announcing it will open a tech office and create 200 high-paid jobs and the arrival of prominent investors like Keith Rabois, Jon Oringer, Peter Thiel and David Blumberg may have led the way, and  the flow has not stopped. While many are still checking the area out, a number of our newcomers already have relocated their startups, made local hires,  leased office space, started incubators or funds, and bought property in the Greater Miami area.

“What is happening in Miami is lightning in a bottle. We have a rapid influx of talent pouring in including the best Wall Street brands, venture capitalists, founders, and the teams they are bringing with them. Their enthusiasm is having a ripple effect and attracting their friends and family as well,” Krinzman said.

“With all this new talent and energy, I believe that Miami has once again earned its 'Magic City' nickname.”

Success from here will depend on learning from one another and everyone rowing in the same direction.

Our newly minted Miamians from California and New York “are bringing fresh energy, ideas, relationships, and a growth mindset to our entire community, not just our tech community," Krinzman said.

"Other stakeholders such as the Miami-Dade Beacon Council are also rowing in the same direction, she added. “But it’s the dedicated crew of founders, investors and community stakeholders who, over the past decade, have been working hard and laying the groundwork for our startup community’s success and todays’ momentum is a testament to their vision.”

While there are startup community playbooks, Miami is writing its own chapter right now. “One of the main things to solve for is how best to make meaningful connections between our new founders and investors and our existing community to build their local networks. And then, how do we engage them in our community at large,” Krinzman said. That will be a key mission of the new VC-in-Residence.

Shai Goldman, a managing director at Silicon Valley Bank, said he knows of 10 venture firms in Miami raising funds right now, about half of them seeking more than $50 million. Some of the firms are headquartered locally, while others have a GP on the ground. Imagine the boost to the local scene if they all raise, he said on Twitter.

Activity like that also underscores why the timing is right for a VC-in-Residence to help engage and connect the funders and the founders, one of the key missions of the new office.

The first year of the Venture-in-Residence position is being underwritten by the John S. and James L. Knight Foundation, which has been strategically investing in building the Miami ecosystem since 2012, when the foundation decided to make entrepreneurship a key focus of its local strategy. In the past year, Knight has supported a number of initiatives aimed at growing or connecting the investment community, such as funding the launches of Black Angels Miami and Function.

“We’re proud to support the inaugural VC-in-Residence program at the City of Miami, helping Mayor Suarez and our community at large in making Miami a home for tech and innovation,” said Raul Moas, Knight’s Miami program director. “Melissa brings more than 20 years’ experience in advising and investing in successful early-stage companies and coaching local tech founders. We have no doubt that her expertise will help our city make the most of this exciting moment.”