Victoire Cogevina, the CEO and co-founder of Gloria, a social media app for soccer players and fans alike, has lived in 11 cities throughout the world, and with each move, she used her fandom for soccer as a way to make new friends and find her tribe. Her dad was a Greek ambassador, and her mother Argentinian. Cogevina was born in Boston.

“Football was a vehicle to connect with the different places I lived. I made friends that way,” she said. “Football” is what the rest of the world calls “soccer.”

Cogevina founded Gloria in Miami in 2018 but soon left for San Francisco looking for a co-founder and CTO and also chasing investment dollars. Gloria - now in beta -  is slated to make a soft launch this year and the full launch is scheduled for the 2022 World Cup in Qatar.

“I met my first angel investor at the World Cup and he convinced me that I would find my business partner and investors in San Francisco,” she said. Turns out he was right.

Cogevina, who recently moved back to Miami, citing it as - “the best American city for football” met Matias Castello, a fellow Argentine soccer fan and previously a product guy at Facebook. “I moved two blocks from him” and over a 6-month period, she said, she convinced him to join her as her co-founder and CTO at Gloria.

“The reason why I moved here [Miami] now is because the future of football in the U.S. is in Miami. The highest broadcasting rates come from here. Since I’m the one in charge of selling the product, I can’t be in San Francisco where football isn’t really a thing,” Cogevina said. Castello (pictured above) continues to be based in San Francisco, and the rest of the company is remote. The team of 6, which include the two co-founders and four engineers, is looking to grow. They’ll be adding more engineers to the team as well as people on the sales and marketing side.

The company plans to make money by charging a subscription rate.

While Cogevina doesn’t play soccer herself - “I play golf,” she said - for her, soccer has been more than a fun way to meet people. It’s played a large role in her career thus far. In Miami, in 2015, she and her mother founded SR All Stars, a Miami-based soccer agency representing elite LATAM professional players in the MLS. It’s the first soccer agency in the world to be started and managed solely by women, she said. Her mother still runs the agency today.

“I grew up in countries where women didn’t play soccer. So it’s great to be in the U.S. where soccer is a women’s’ sport and not a men’s’ sport,” said Cogevina, who lived largely in Europe and Latin America growing up.

As a woman who doesn’t play soccer, yet has largely worked in it, she said her mother taught her to never think of herself as a woman first, but rather just as a person.

“We forget now, because women are in fashion these days, but we forget that women weren’t allowed to play [soccer],” she said. “Whenever I brought up being a woman, she [her mom] would look at me and say ‘Why are you bringing that up? Just focus on who you are and be the best that you can be, and that’s all that matters,’” Cogevina said.

Indeed, her mother was a wealth manager who helped a lot of soccer players manage their money, and over time she found herself helping them manage their careers, too. That’s how the mother-daughter duo broke into the business of soccer.

Today, while building her app - which has received investment from Initialized Capital and Muse Capital, and has Alexis Ohanian on the board - Cogevina is also a United Nations ambassador for gender equality in soccer. Additionally, she is on the board of Women in Sports Tech (WiST), the “leading organization to drive growth opportunities for women in the fast-growing sports tech industry,” according to the organization’s website. “50% of the U.S. labor force, sports fans, and athletes are women - and yet the representation of women in sports tech is a small fraction of that,” says WiST, which aims to change that.

Cogevina never considered her gender when she had the idea for Gloria, but she remembers meeting other women who thought it was a little odd that a woman was building “the home of football online,” she said. “My mom never ever let me use my gender as an excuse to not do something,” she said.

Gloria - which I got a preview of - allows players (from amateur to professional) to upload videos of themselves playing, and it has a newly created Communities section, “which has a lot of similarities to Reddit, so it’s been amazing to have someone like Alexis guide us,” Cogevina added. Gloria recently closed a seed round for an undisclosed amount and with undisclosed investors. 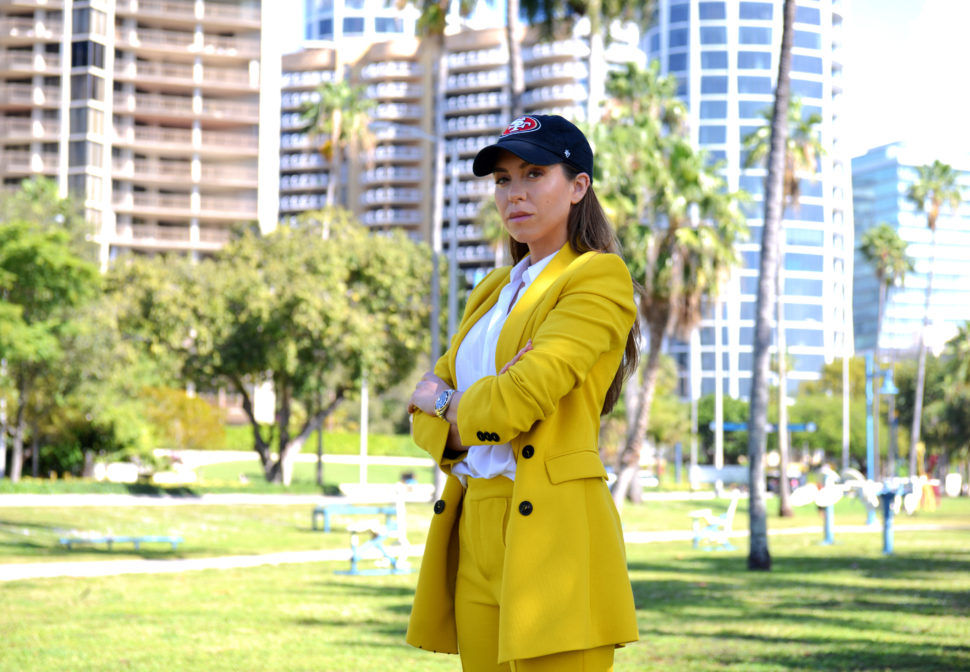 Victoire Cogevina in Miami. At top of post, Cogevina with her co-founder, Matias Castello. Photos provided by Gloria.