Felecia Hatcher wants Miami to be a hub for Black innovation. Thanks to some heavy backing announced today, this Miami entrepreneur and community leader will see her dream move closer to reality.

The John S. and James L. Knight Foundation, the Surdna Foundation and Comcast NBCUniversal announced $2.1 million in investments to support the Center for Black Innovation. The Center will provide startup and investor education to accelerate Black tech entrepreneurship in Miami and nationwide.

The new investment includes $1.5 million from Knight Foundation, $350,000 from  Surdna and $250,000 from Comcast NBCUniversal. With the investment, the Center for Black Innovation will serve as a research center committed to creating equitable pathways for Black founders to thrive and raise capital, Hatcher said. She founded Code Fever with husband Derick Pearson in 2013 and together over the years they have launched a number of ventures, including youth coding training, a co-working center called A Space Called Tribe, an events business and a VC in Residence program that will be all become part of the rebranded and expanded Center for Black Innovation.

Specifically, the nonprofit Center for Black Innovation will conduct research on Black tech entrepreneurship in local startup ecosystems. New programs will  focus on angel investor training and venture capital investor matchmaking, and the Center will continue to offer in-person and virtual courses for entrepreneurs at its Overtown headquarters and in cities across the nation.

The idea that a national Center for Black Innovation will be built in Miami with  three national foundations funding it – and a fourth suporter likely coming on soon – is a big deal and the funding will help  take Hatcher and Pearson's efforts to the next level, said Raul Moas, Knight Foundation’s Miami program director.

Moas is particularly pleased this funding will support the Center’s investor education work. “That is aligned with Knight’s strategy of building up the investor class in Miami that's representative of the city,” he said. Knight has made other investments in this area, including funding the launch of Black Angels Miami earlier this year.

This is Surdna’s first investment in the Center.  The social justice charitable foundation’s Inclusive Economies program focuses on investing in business development for communities of color and increasing community voice in economic policy and planning. “This partnership creates the opportunity for the Center for Black Innovation to be a training ground for other communities across the nation to build and strengthen their Black tech ecosystems,” Patrice Green, Inclusive Economies program officer, said in a statement.

This investment is part of Comcast NBCUniversal's multi-year $100 million commitment to addressing digital inequities.  “Comcast NBCUniversal has joined with Code Fever Miami and Black Tech Mecca on their work to develop the next generation of Black innovators and entrepreneurs, and we are proud to expand this partnership with our support,” said Dalila Wilson-Scott, executive vice president and chief diversity officer.

Knight Foundation has supported Hatcher and Pearson’s work since they launched Code Fever in 2013 to address a lack of entrepreneurial opportunities in Black communities. The new grant funding, which  more than doubles the dollars Knight has invested in their work so far, will be distributed over four years.

In the past, the Center’s founders have helped Black-led startups such as CaribShopper, IcanFitness, Adwizar, Beloved Box and GovLia  build their businesses and connect with funders and mentors. That type of work with continue at the Center for Black Innovation, which will be based in the building that housed Space Called Tribe.

The Center will focus on providing programming for entrepreneurs, along with youth programing (formerly under the CodeFever brand), and will house a startup studio, said Hatcher, the Center’s executive director. Startups and investors will be able to be members of the Center. To help Black startup ecosystems grow nationwide, the Center will begin taking applications next week for its Ecosystem Builders Fellowship Program.

In an interview, Hatcher said Blacktech Week conferences likely won’t continue, at least in the same format, because the Center’s focus will be on ongoing programming, a much larger priority. That’s a pivot because the team has been holding the popular multi-day conferences around the country since launching the first one in Miami in 2015.  “You can't really transform startup founders in a day or two conference,” Hatcher said. “Yeah, you hope serendipitous moments happen, but, the entrepreneurs that we work with can't bet on serendipity.”

As a key part of its expansion, the Center for Black Innovation recently acquired Black Tech Mecca, a think tank that uses data to assist Black practitioners in finding opportunities in the global tech sector. Hatcher said good data on Black entrepreneurship was a missing link that nobody was providing.

For the past few months, the Center has been building out a research team. After revamping and redistributing some of Black Tech Mecca’s reports, “we're going to start working on the first report using their framework to score the health of Miami's startup ecosystem specifically as it relates to Black and Brown entrepreneurs,” Hatcher said.

Moas adds, “I think she's making a bold statement on the kind of information we need if we're going to hold ourselves accountable to building truly representative, accessible and inclusive ecosystems and startup communities. And that is because a lot of the data that we normally get around startup activity, startup formation, venture capital activity comes from the national level, and we know it's not how the how local startup communities work.”

Pearson is spearheading the expansion of the Venture Capitalist in Residence program he started a few years ago. It was conceived to be a pre-accelerator type of program to help entrepreneurs who have limited networks access seed  funding as well as mentorship to make sure "they weren't building something and going 100 miles in the wrong direction,” Hatcher said. The Center partnered with venture capitalist Marlon Nichols, TechStars, Samsung Next and others to run cohorts in Miami as well as other cities.

Shakeia Kegler, founder and CEO of GovLia, a startup that aims to make government contracting easier for diverse small businesses, participated in the VC in Residence program three years ago. “This was pivotal in the creation of GovLia. We had the opportunity to sit down and speak with experts like Raul Moas to gain advice and insight in the early stages of business, helping us navigate just a little easier. Since that program, Felecia and the Center for Black Innovation have constantly supported GovLia through access to learning opportunities, access to key personnel at organizations, and access to resources I would not have had access to without their support,” Kegler said.

The funding will allow the Center’s team to run multiple cohorts per year as well as work to increase the pool of investors that would, hopefully, write first checks for the entrepreneurs in the program.  “And so what that looks like is identifying high net worth Black individuals here in South Florida, and then taking them through the accreditation process as a pool of the first eyeballs that will look at the entrepreneurs in the program. We are tackling it from two sides and the goal is for them to meet in the middle,” Hatcher said.

A severe shortage of Black tech investors is a national problem. An even bigger one: the fact that less than 1% of venture capital in the U.S. goes to Black founders. “If we can get more investors into the pool, overall the entire startup ecosystem can rise,” Hatcher said.

“I hope the Center for Black Innovation is around for the next 100 years. I literally want Miami to be known as the center for Black innovation,” said Hatcher.

“I want people to come here and say, ‘this is a great starting point if I'm trying to access top talent, or access transformational companies, or if I'm just trying to dream and figure things out.’ That is what is waking me up every day -- to figure out how to make that happen.” 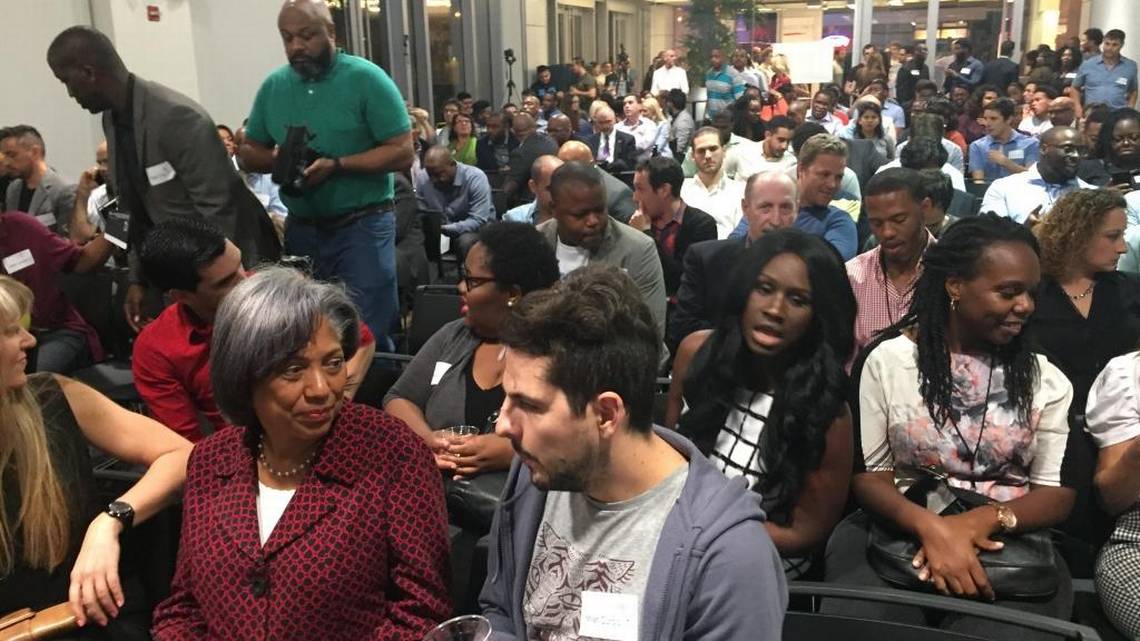 Crowd at Blacktech Weekend in Miami in 2017.

Photo at top of post of Felecia Hatcher is from Center for Black Innovation.

Impress Investors with your Financial Projections