Alejandro Burgana has always been a car guy, even as a kid. “I knew everything about the race car drivers, the technology and the internal combustion engine, the collections, all of that.”

Burgana (pictured above), an entrepreneur, is also environmentally conscious so maybe it’s no surprise he purchased the second Nissan Leaf electric vehicle in Miami way back in 2012. And as soon as he drove it, he said he believed the technology would help change the world.

About the same time, the biofuel concept Burgana had been working on wasn’t taking off and he knew it was time to reinvent. He also wanted to do something that would reduce the carbon footprint even more.

Electric vehicle charging was the answer. Burgana rebuilt the concept of the company, moving from jet bio fuels to “EV charging-as-a-service.” Companies like Tesla and Electrify America are focused on building fast-charging stations on major highways connecting the urban centers. “While they are doing that, we are focused on urban environments, where people spend most of their time. We are complementing each other,” said Burgana.

While he says he was too early out of the gate, particularly in Florida, in the last couple of years the concept he was developing has gained traction along with the e-vehicle sector. Today, Burgana is founder and co-managing partner of OBE Power along with partner Luis Paul. Burgana is also founder and CEO of sister company Brickell Energy.

“We are accelerating the transition to e-mobility by building a smart and distributed ecosystem of EV charging stations at convenient locations where most EV drivers live, work, play and learn,” Burgana explains. “By working with municipalities, parking authorities, universities, developers and property management companies, we are the leading EV charging network in South Florida and the fastest-growing owned and operated network in the state.”

Fast forward to February of this year, and OBE Power was on a roll. The energy startup had been installing its e-vehicle charging stations around South Florida at a fast clip, it had just hired a CTO from Apple, and was in the middle of a capital raise. The company had enjoyed 36 straight months of revenue growth.

And then, COVID-19 showed up and ruined the party. In an instant, it seemed, everything changed for the growing small business. Revenue dropped by some 80% in March. The conversations Burgana was having with investors had to be put on hold.

Burgana and the team are passionate about clean energy and doing their part in creating a sustainable world by reducing the footprint of transportation, so the companies’ survival was job one. In April, OBE Power and Brickell Energy put in place a COVID resiliency plan.

OBE Power cut its expansion rate in half, from its pre-COVID clip when the company was activating one new charging station every other day. It was already operating lean, but found ways to burn even 60% less cash during the months that would follow as it worked with vendors on executing the resiliency plan. “It was either that or shutting the door, and of course we didn’t want to do that,” Burgana said, in an October interview.

At the same time, resiliency is about adapting a business model to a changing world.

OBE Power contracted with workplaces, but if people are no longer going to the office and they're all working from home, at least for the time being, did that make sense? “So we put all the workplace projects on hold and we emphasized and tried to close with municipalities and multifamily condominiums and that's pretty much what we're doing now,” Burgana said

“The good news is we are now holding to our projections for our resiliency plan,” said Burgana. “We are recovering our revenue levels. We will be back where we were in February this year. We managed to stay alive and at the same time to grow in the process.”

What’s more, throughout the COVID-19 crisis, OBE Power and Brickell Energy retained their employees and electrical contractors. “We didn’t lose a single contract, a single customer or a single member of our team,” Burgana said.

Selling has accelerated again, including a string of new contracts with South Florida condominiums and apartment communities for charging stations. Also recently, through a competitive process, OBE Power won and executed a grant agreement with the Florida Department of Environmental Protection to install EV fast charging stations in rest areas along the. I 75 Highway in the Naples region. Through the grant agreement, the agency will cover up to 75% of project costs.

What’s ahead? In the next few months, OBE Power is planning to resume fund-raising to fuel the expansion of charging assets as well as further development of its technologies platform. It sees fertile ground to expand beyond its home base in South Florida, to the rest of the state and the Southeast, where there are fewer charging stations than other areas of the country. OBE Power is in in conversations with dealers active in Texas, Georgia, and North Carolina.

To date, the company has raised close to $2 million and has been pretty much doubling its network every year. When it closes its next round of equity and debt, Burgana believes it can go from its 200 charging points it has today to over 1,000 in the next 24 months. OBE Power recently announced that early-stage social impact-focused Verte OZ Fund joined its upcoming seed round.

But for Burgana, growing the company in Miami is special. “Miami is ground zero for sea level rise and we would like to make a statement. We need to start here, because our way of life will be affected. It is important to spread the message of the importance of reducing the footprint of transportation.” 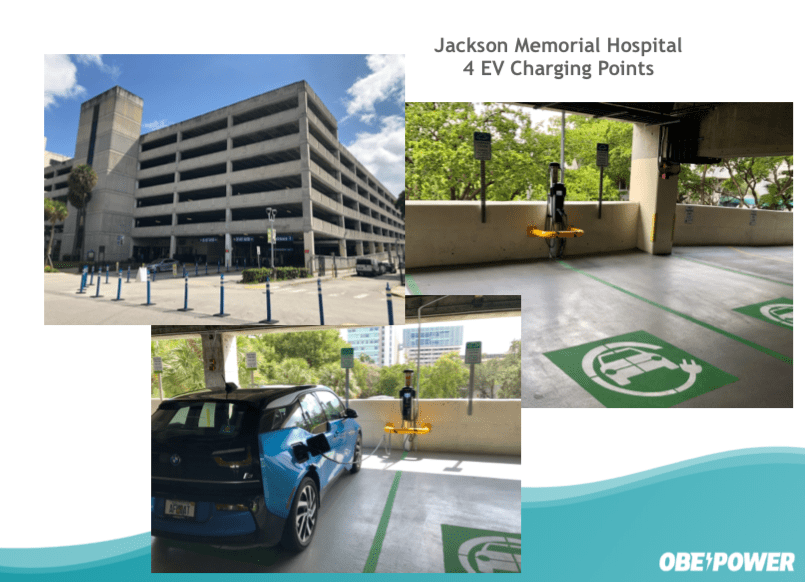