We’ve read so many depressing stats about the low representation of females at tech companies and in founder, executive and board roles. We’ve also heard that companies headed by female CEOs draw just 2-3% of venture dollars.

So after all this, here’s an uplifting finding: Startups with at least one female founder raised 21% more in venture capital funding than companies with all male teams.

That’s a finding of a recent study by the Kauffman Fellows Research Center. The analysis used data from market researcher Crunchbase of more than 90,000 U.S. venture-backed companies from 2001 through 2018.

The Kauffman center also found that, at the seed stage, mixed-gender teams raise about the same amount of money as those without women, but in later stages the female advantage grows. 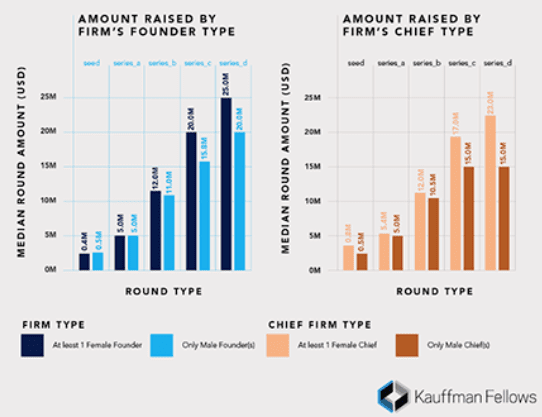 In the third- and fourth-round raises, companies with at least one female founder get on average $23 million in VC investment, compared with $18 million on average for all-male teams.

Still, the study found, only 22% of all startups are founded by at least one women. Findings include that the percentage of women-founded companies has grown from a low of 4% in 2001 to 21.6% in 2018.

The study highlights that the strongest driver of gender diversity within rising startups is, well, more diversity.

As the number of women in founding startup roles increases, opportunities for success for other women increase as well. It is statistically more likely women will be hired in executive roles when there is already at least one female founder at a startup. For example, nearly 50% of consumer service firms with a woman founder had women serving as C-level executives, but only 10% of consumer service companies with all-men founders had women in C-level roles, the study said. And last but not least, companies with at least one female co-founder raise more capital by stage than all-male founding teams.

“Hopefully when people start looking at this data, they start saying, ‘Well shoot, me and my two buddies from Stanford should maybe go and do some outreach and make sure that we bring someone on that has a unique point of view, because we don’t,” Collin West, co-founding partner of the Kauffman Fellows Fund and one of the authors of the report, told Bloomberg.

Research from PitchBook found that of the $130 billion in venture funding invested in startups last year, only 2.2% went to those run by all-female teams and about 13% went to startupss with a female anywhere on the founding team.

TissueTech, the Miami-based life sciences company led by CEO Amy Tseng, received $82.25 million in the second quarter.  Other South Florida female founders and CEOs who raised funding in the first half: Lisa Rhoads of Sonavation; Melissa Doval of Kairos; Yenvy Truong of HealthSnap; Valerie Lopez of Shoot My Travel; Jessica Levison of Peekaboo Ice Cream; and Cheryl Baker of BioCurity. And the second half was led off by Caribu CEO Maxime Tuchman, who raised $1.7 million through an equity crowdfunding campaign.

Yet, in looking at the 15 top raises by South Florida companies in the first half, only the aforementioned TissueTech and Sonavation had a female in the founders circle. We can do better than that.

Locally, Aminta Ventures continues to try to address the issue of gender parity in investment, with increasing traction locally. It recently called for entries for its pitch competition with TheVentureCity (deadline extended to Oct. 8) and it has two events coming up: A Smart Session with Hilarie Bass and its annual Female Angel Investor Bootcamp, in partnership with New World Angels. Find more about the Angel Bootcamp here.

You can meet the newest cohort of WIN Lab Miami, a 5-month accelerator program for female founders, on Oct. 22 at TheVentureCity. Read more about the cohort here and  RSVP for the event here.