Navigating COVID-19: A peek at the global and local picture for startup funding

Most startups don’t have enough cash on hand to weather this global pandemic and most have already had to resort to layoffs. Three quarters have already experienced revenue declines and have resorted to layoffs, say the findings a new global Startup Genome survey. 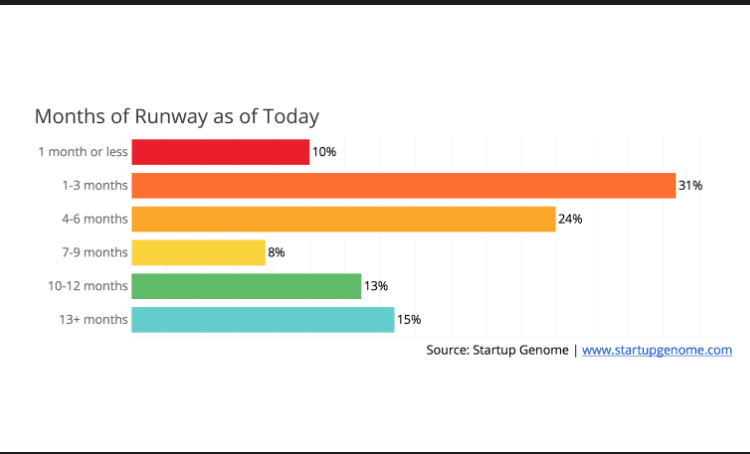 These findings come as the venture capital machine has already started so slow down. Startup Genome has launched the first two installments of its COVID-19 and Startup Ecosystems Series. In its first report, authored by CEO JF Gauthier and Chief Innovation Officer Arnobio Morelix, Startup Genome found that based on the experience of China, where venture investments fell by half in the first two months of the pandemic. the world’s startups could lose approximately $28 billion in venture investment. That goes up to a decline of $86.4 billion, in a year long-recession that could follow, the report said.

In the report’s  second installment  released today, Startup Genome authors looked at the impact the COVID-19 crisis is already on tech startups. Among its findings: 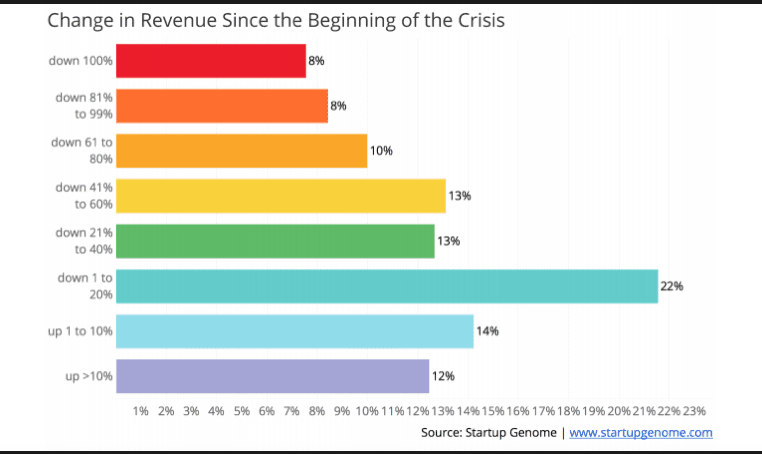 Future Startup Genome research will be based on founder surveys in individual ecosystems, including likely Miami’s, which raised a record $2.39 billion in venture capital last year. Refresh Miami has already been reporting on how startups in our ecosystem are adapting to the new reality and will continue to do so. South Florida venture capitalists and angel investors also have been speaking out and offering some advice to the Miami area’s startups. Many of them have weathered serious downturns before.

In a webinar series put on by LAB Miami  Ventures, a startup studio and prop-tech VC fund, Chris Fountas, managing director of Arsenal Venture Partners, who has been through several recessions in his 20 years investing in tech ventures, says his first priorities will be portfolio management during this period and follow-on for Arsenal portfolio companies that most need it.

He’s not alone. In the Startup Genome survey, nearly three-quarters of startups who had term sheets in process since the start of COVID-19, have seen the process stop or slow down considerably. 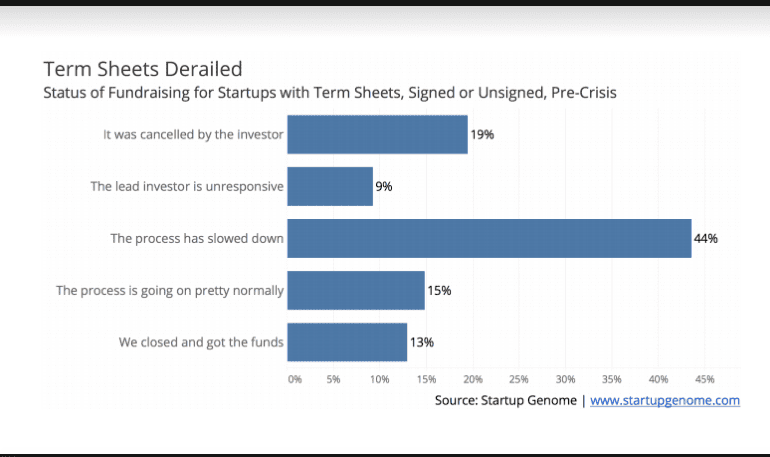 “For a founder what that means to you is you will want to make sure your operations are as capital efficient as it can be, you want to be capital light to the extent you can be, because those are the kinds of deals comfortable in this type of environment,” Fountas said.  “If a founder has access to cash keep it close and make it last.”

He said he hasn’t seen valuations come down yet but expects both deal volume and valuations will drop.  He adds: “I have seen companies walk away in these times at valuations they weren’t comfortable with when they did need it. Most of them didn’t survive.”

Patty Wexler, co-founder and managing director of Starlight Ventures, a fund that typically invests in 8 to 10 early-stage deals per year, warned startups that getting to yes will likely take longer in this environment because pricing risk is harder. “If you can wait till the summer or later [to start raising money], that is the better option,” she said.

Nico Berardi of Animo Ventures, a new early stage $60 million fund, warned of the paradym shift in progress. “For the last year it has been growth at all costs and now we are in a shift to survivability and adaptability. Survival is the name of the game.”

Berardi said startups in Miami can benefit in the talent hunt, as the large well-funded companies shed some employees in recessionary times. “If you are able to lean in and hire there will be interesting opportunities to hire top talent.”

More advice from Berardi: "You’re making very difficult decisions, don’t try to act like it is business as usual and hide your emotions. Keep yourself mentally healthy.”

They all said startups should be revisiting all their assumptions about their vision, operations and scenario planning.

“The entrepreneurial mindset is well suited for this time of huge unknowns. Try to remember that you don’t have to have all the answers today -- you have to learn how to make the decisions that will allow you to keep most options open. This is a moment of leadership, so be considerate of your investors, employers, customers, etc.,” said Wexler.

And you have to react quickly, Fountas added. “You need to be very diligent to reacting to shifts in your customers or prospective customers.”

All three said they were open for business - Berardi has closed several deals in the last couple of months - but that’s not true for all Florida VCs.

Miami-based Krillion Ventures Managing Partner Melissa Krinzman told the South Florida Business Journal she is pausing new investments for now. She is using the time to work with her current portfolio companies weather the recession.

"I do think a lot of startups will fail and not be able to raise money, but the strongest ones will find funding over the next three to six months," Las Olas VC's Mark Volchek told the Business Journal. "We're advising companies to wait until 2021 to raise their next round if they can."

Miami Angels is open, however. The angel investment network with more than 100 angels recently announced it closed on an investment in Florida-based ed-tech startup Knack during the month of March.  “If a company with a strong founding team, early user traction, and an innovative business model is raising capital, then Miami Angels is ‘Open For Business’,” its blog post said.

Brian Brackeen’s Lightship Capital is open too. The fund specializes in early-stage tech founders not in the tech hubs of Silicon Valley and New York City and typically invests $125K to $500K.

“It’s going to be frustrating. In the best of times it takes more time than you’d like, now from an investor’s side, the market has shifted from founder to investor friendly. People are going to take their time. Look at the investor as a partner, not as a transaction,” said Kevin Cadette, the new executive director of Black Angels Miami, in a Zoom discussion with BlackTech Week’s Felecia Hatcher.

On a more positive note, the Startup Genome report said that during the past two recessions, although fewer dollars were invested, more companies got funded, suggesting that businesses that are able to become cash efficient might become even more likely to raise money following a recession, albeit at lower valuations and lower total funds raised.

Startup Genome’s authors also pointed out that over half of Fortune 500 companies were created during a recession or bear market, and over 50 tech unicorns, collectively valued at $145.2 billion, were founded during the 2007-2009 recession years.