Neocis CEO Alon Mozes, with a little help from Yomi the Robot, has big news to share: The Miami-based pioneer in robot-assisted dental implant surgery has raised $72 million in venture capital to accelerate R&D and commercialization.

The Series D round of financing was led by DFJ Growth, a Silicon Valley venture firm that backs Tesla and SpaceX. The healthcare-focused Vivo Capital joined the round as a new investor, alongside existing investors Mithril Capital Management, Norwest Venture Partners, and Section 32, a firm founded by Bill Maris, founder of Google Ventures. Fred Moll, the robotics pioneer who was Neocis’ first backer, also invested this time, as he has in every round.

The $72 million round represents the second-largest raise by a Florida-based company so far this year and the largest in the Sunshine State's most-active sector of  healthcare. Neocis has raised more than $120 million in financing to date, including a $30 million round in July 2019.

“We’re excited. This is an opportunity to pivot this technology to really disrupt the entire dental industry,” said Mozes, in an interview with Refresh Miami. “We are the first and only robot-assisted surgery system in the dental industry.”

While robot-assisted surgeries are common in many medical specialties, not so in dentistry. But that’s changing with Neocis.

Yomi, a computerized navigational system, brings a new level of precision to implant surgery by providing software to pre-operatively plan dental implantation procedures. That’s followed up by navigational guidance of surgical instruments during surgery to carry out the surgical plan exactly. Yomi can be used for flapless dental implant procedures, which is a minimally invasive and fast-growing surgical approach.

Yomi has so far helped place more than 2,700 dental implants. The platform is being used at Boston University Henry M. Goldman School of Dental Medicine and the West Virginia University School of Dentistry to train the next generation.

“Unlike other areas of medicine, dentistry has not benefited from advances in robotics technology – leaving a huge opportunity for innovation,” said Jocelyn Kinsey, partner at DFJ Growth. “Neocis’ unique technology and vast experience in surgical robotics gives the company a tremendous first-to-market advantage to address the needs of this large and growing category.”

Mozes said the funding will be used to power efforts on the commercial side, including expanding the sales and marketing teams,  as well as in R&D, further building out Yomi as a platform capable of more types of dental procedures and surgeries. Yomi was cleared by the FDA in 2016 for certain kinds of implants. But in July, it was FDA cleared for patients who need complete arch reconstructions -- very complex surgical cases.

So far, sales in 2020 are going well, despite early fears that COVID-19 would derail progress.

“Selling robots is great and we have great growth on that front, but what we care even more about is how often they are used to place implants. We’re seeing fantastic growth on utilization, which also leads to great recurring revenue for us,” Mozes said.

Neocis is a very Miami story.

Mozes and Juan Salcedo, both engineers who met while working at Mako Surgical, came up for the idea for Neocis in 2009. In 2012, they landed their first angel investment, from Moll, and their first scrappy prototype of what would become Yomi is proudly displayed in the Neocis offices as a reminder of their humble beginnings.

Today Neocis has 80 employees – that’s up from 10 people in 2016 – and this round will help continue that growth. “Hopefully in another year or so we’ll be looking to almost double again,” Mozes said.

The company employs about 50 in South Florida, including engineering, manufacturing and quality -- most of the key functions to design and build the system. Neocis is looking to hire engineers -- software, mechanical and electrical engineers, Mozes said. “There’s a lot of interesting opportunities and we’re excited to do all of that in South Florida as much as possible.”

Mozes grew up in South Florida, and after getting his bachelor’s and master’s in engineering at MIT, he got his start in Silicon Valley working for an innovator in special effects for sports broadcasts. In 2004, he returned to Miami to study biomedical engineering at the University of Miami, earning his Ph.D. a few years later. In 2005, Mozes became one of the first 20 employees at Mako Surgical, working there through Mako’s IPO.

Mozes and Salcedo are part of a network of former Mako leaders and employees who have gone on to form or grow other ventures in South Florida, including Magic Leap, OrthoSensor, Insightec and DermaSensor.

It’s been a long road, but the Neocis vision is coming to fruition, Mozes said.

“This latest round of funding will allow us to expand the reach of our robotic-assisted surgical system and fuel further development of Yomi’s technology platform to deliver increased value to every dental office in the country.” 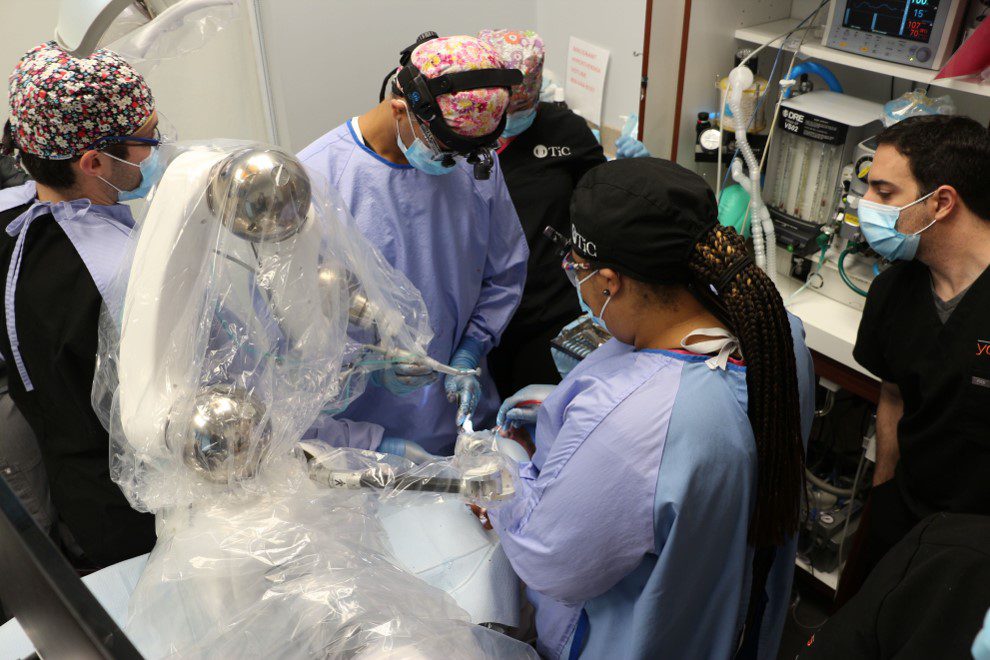 Photo at the top of this post is Alon Mozes, co-founder and CEO of Neocis. All photos were provided by Neocis.