Greater Miami creates new businesses at a faster clip than anywhere else in the country and it attracted $1.4 billion in venture capital investment last year to support new ventures. Yet, nearly two-thirds of Greater Miami’s residents work in low-paying service jobs, more than the rest of the United States, and over 80 percent of companies in Greater Miami employ 1 to 9 employees and create less than 15 percent of total employment in the area. What's more, between 2008 and 2017,  Miami’s GDP per capita declined at a time when U.S. metro areas an average of 3%. 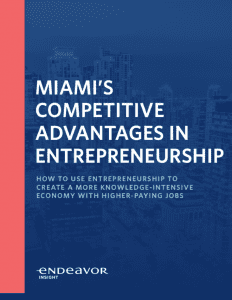 While those statistics shed light on the dichotomy of Greater Miami’s economy, a new report also identified ways that Miami can grow its economy and create better paying jobs by using its entrepreneurial muscle. That is by supporting larger, entrepreneurial companies operating in sectors such as software, financial services, medical devices  and logistics where Miami already has a competitive advantage.

The new report,  based on a study of over 20,000 companies in the Miami metro area and released today by Endeavor Miami, identified six sectors in the Miami metro area as “high value” based on the proportion of companies with 50 or more employees already here – called scaleups in this this report – as well as growth and local dynamism, a rating of the portion of larger companies founded in the last 10 years.  A significant number of the younger scaleups have capitalized on local assets such as PortMiami, the presence of international media companies, or the city’s close ties to Latin America, the report found.

Those six sectors are: transportation and logistics; financial services; software and software-enabled firms; consulting firms, pharmaceutical and medical device companies: and advertising firms, according to the report, conducted by Endeavor Insight, the research arm of Endeavor, which helps high-impact entrepreneurs accelerate the growth of their companies, and funded by the John S. and James L. Knight Foundation.

“The report is very balanced. It highlights our strengths but also our challenges. I think it is very important to think about how we will focus our economic development efforts where our economic advantages are,” said Endeavor Miami’s Managing Director Laura Maydón. “The report validates that entrepreneurs are thriving, that there are clear competitive advantages and now we can position resources to play to our strengths.”

Transportation and logistics should not be a surprise with the region’s ports and airports supporting thriving aviation and cargo companies. There are nearly 3 times the number of larger companies – 40+ with 50 or more employees -- in the sector in the Greater Miami region compared with the rest of the U.S. There are also more young companies of this size, companies formed in the last 10 years. That economic muscle is at work with larger companies, such as World Fuel Services founded in 1984, to the fast-growing shipping fulfillment upstart ShipMonk launched in the last few years.

Software was also a sector identified by a higher concentration of companies with 50 or more employees that the national average and more of these firms that started in the last 10 years. Software also has a high projected growth rate and an average salary locally of $100,000, about twice the area's median household income.

The report found clusters of successful homegrown software companies serving prominent local industries such as healthcare, construction and finance; examples include e-Builder and Farelogix, which recently exited, Modernizing Medicine and CareCloud. Other giants such as Ultimate Software, which recently went private, and Citrix have reached multi-billion dollar valuations. The report also noted e-commerce success stories such as Chewy, sold in 2017 for more than $3 billion.

“Miami’s endemic strengths have been backed by data,” said Raul Moas, Knight Foundation program director for Miami. “Miami does have a place for producing software enabled businesses and there is a virtuous cycle being established around the wealth creation being invested in the community,” he said, noting the cycle already being created by the sale of Mako Surgical that includes Magic Leap, Insightec, Neocis and OrthoSensor.

Also notable, said Rhett Morris, director of Endeavor Insight, is the rate of younger companies reaching 50 employees in a less than 10 years, higher than other cities across the U.S. “When you are in Miami you feel that dynamism. You feel there is a lot of growth and momentum. In the case of Miami, the data matches up.”

Still, Miami has a number of entrepreneurial programs focused on tech but not so many aimed at the other sectors of high-value. Maybe there is an opportunity there, Morris said.

The report also included a number of recommendations.

Endeavor’s core mission is founder-centric and think of the multiplier effect these companies can have, said Maydón. Endeavor Miami, launched in 2013, mentors and supports high-impact entrepreneurs who are leading companies that generated $200 million in revenue and supported over 2,000 jobs last year. In addition, Endeavor Miami launched its ScaleUp program last week to help promising local founders not quite ready for the Endeavor network to scale their ventures.

"We hope that as we share this report with other community leaders, we can all as a community bring more resources to developing the high-value companies,” Maydón said.

“We’ve seen evidence that the ecosystems that are most productive are the ones where founders have the deepest attachment to place,” Moas added. Some of the grants that Knight recently made are focused on helping founders develop deeper networks and engagement. For instance, one was made to a program called Just Dinners, to gather founders who don’t know one another; another is focused on forming a Creators Council, a YPO-like forum where founders can talk openly and get advice.

“It’s a great point of distinction that Miami is the Number 1 city in America for small businesses -- it speaks to the fact that a bunch of folks in this city choose to be here. At the same time, a low percentage of high-growth companies are creating a large percentage of  job creation, wage growth and GDP contribution. We want to focus on attracting  and retaining the kinds of individuals that are building those companies here," Moas said.

"Miami has an opportunity to double down on high-growth ventures.” 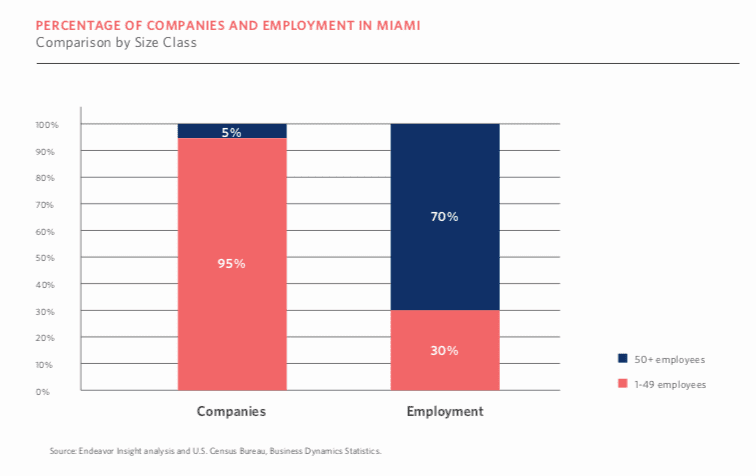