Plei connects amateur soccer players so they can enjoy the sport they love. Now the Miami-based startup wants to score its first round of funding from its crowd.

The bootstrapped on-demand soccer startup recently launched a campaign on the equity crowdfunding platform Republic. The co-founders hope to raise $250K or more by tapping the passionate community around soccer, the world’s most popular sport.

“The whole idea is for soccer to be as easy and accessible to as many as possible. If you want to play soccer, you have to gather people to play with and then find a field. With our app, it is as easy as ordering an Uber. You just hop in, we have games all over South Florida and Houston, and with two clicks you can join a game,” said CEO Sebastian Duque, who co-founded the company with his brother, Alejandro.

In addition to managing bookings, Plei’s platform also brings more business to partner facilities by hosting games at unreserved fields through the mobile Plei App. The Plei App, launched in March of 2019, has drawn more than 10,000 active players in South Florida and Houston, its first expansion market launched five months ago.

Through its research of the US market, Plei found that Houston had the most similar profile to South Florida for soccer, Duque said. The startup next plans to expand to New York City and hopes to end the year in 10 cities.

Out of the gate, Plei generated $300K in 2019 revenue and projects to more than triple that in 2020. The company makes money three ways. Partner facilities pay a monthly subscription, averaging $199, for the Plei System and Plei App services. Plei also charges 6% per credit card transaction that goes through the Plei System; it is currently processing about $400,000 a month in gross merchandise value. It also negotiates discounts on field rates in order to net more revenue per game. Players typically pay $5 to $11 to play and pay through the Plei App. 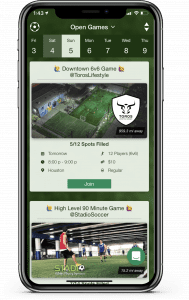 The Duques are amateur soccer players themselves and sons of Colombian immigrants who are also entrepreneurs. Sebastian, who studied international business and management at Loyola, moved back to Miami to help run his parents’ insurance company, and he did for a couple of years. Yet the passion wasn’t there so he took the startup leap. He taught himself some basic coding skills and also design; he is the lead designer for both of Plei’s platforms. With the funding, Plei, now a team of seven, hopes to hire more developers as well as non-technical roles.

“We don’t see ourselves as a pickup app but as a technology company, and we are trying to automate the entire process so instead of 20 games in a day we can have 1,000 games a day,“  said Sebastian, who is pleased to be building the company in his hometown. “I’m very passionate about repping Miami as a technology hub for the long-term.”

Find out more here about the crowdfunding campaign, in which people do not have to be accredited investors to invest $100 or more in Plei. The campaign closes May 1.