The inaugural Pareto Fellowship cohort kicks off today. Let’s meet the 17 Fellows and find out more about Pareto Holdings.

This week, the Pareto Holdings  team will gather 17 young innovators from around the world as part of the inaugural Pareto Fellowship, bringing a fresh idea to #MiamiTech. Shutterstock founder Jon Oringer and Goody CEO Edward Lando  founded Pareto late last year to launch amazing tech companies from the 305, and their call for entries for an inaugural Pareto Fellowship class drew 600 applications.

The Fellowship – a five-day program that will include education, coaching and fireside chats with some of the tech world’s most successful people as well as up and comers – is  just one part of Pareto Holdings’ strategy to launch disruptive companies from Miami. Pareto has also been investing in tech companies – two recent recipients are Famosos, and NUE Life – as well as venture-building some of its own. On the venture-building side, Pareto sources entrepreneurs to work on ideas, and in the last six months or so, it has launched 8-10 startups from Miami, including Smartrr and another company in the fintech space, a telemedicine company and an edtech startup, and has more on the runway,  said Pareto’s Chief of Staff Nadav Ben-Chanoch, a Miami native who joined Pareto in March.

The Pareto team hopes that, in time, new ventures will spring from the Fellowship cohort too.

So how do you come up with 17 fellows from 600 applicants? Ben-Chanoch said there were hundreds of smart, strong applicants, but the team was focused on convening an enthusiastic, diverse group, in backgrounds, skill sets and the ideas they bring to the table. “What if we brought a bunch of people with diverse skill sets to brainstorm some ideas and see if we can launch some things together? That's the thesis here.”

The group ranges from students to some who have started several ventures or bring extensive operational experience. Pareto also looked for enthusiastic collaborators and team builders – in other words, the type of people Pareto would want to work with, Ben-Chanoch said. “We’re very much heads down  trying to build companies here, and that's why you don't hear from us quite as much as you do from some of the other players that have made their way to Miami now. We’re just trying to  empower our founders and put them in a position to succeed.”

The program includes fireside chats and Q&As  with Miami Mayor Francis Suarez, SoftBank Group International CEO Marcelo Claure, Papa CEO Andrew Parker as well as CEOs of Pareto companies and others that they hope will be informative as well as inspiring. Also as part of the program, several hours a day are blocked off for brainstorming and office hours with the Pareto team. As the week progresses – as well as after the Fellowship -- “we're hoping to see some organic partnerships or small teams form,” Ben-Chanoch said. “In an ideal world, I would love to have an opps person match up with a technical person who like healthcare or fintech, for example ... The hope is to bring in like-minded individuals who all are entrepreneurial and hungry to build something,” he said.

Like the companies Pareto is venture-building, Pareto is prepared to support and invest in companies that may potentially form out of this in the future.

This inaugural cohort comes from all over the world. Four of the fellows are from Miami or Florida. Juha Mikkola, the #MiamiTech OG and co-founder of Wyncode that was recently acquired by BrainStation, is one of them. Christian Gonzalez is a software engineer studying computer  science at the University of Central Florida. Kayra Yasa and Amila Karunaratne are from Miami, and represent the diversity of the pool of fellows.

Kayra Yasa, a native of Turkey, attended DASH and was a Miami Herald Silver Knight winner, then left Miami for a bit to attend college in Illinois, studying material science and engineering, and worked as employee no. 1 at a biotech startup. She dropped out of college and moved back to Miami in January to launch a startup, PRO Marketplace. She also rejoined a local nonprofit she co-founded while in high school, DesignLab Give, which helps girls and women around the world with their basic human needs.

Before the fellowship started, she had already connected with the other 16 fellows. “They're working on incredible projects all the way from deep AI and and machine learning to improving mental health. and I'm excited to build a company with such an incredible network in Miami that actually has an impact on lives.”

Amila Karunaratne, born in Sri Lanka and raised in New York City, has worked in healthcare research, including working with a Nobel Laureate scientist in Toronto. She also has an MBA, worked in investment banking, and started her own healthcare consulting company. While she’s been in the healthcare field for about 15 years, she is also interested in the edtech space and social impact.

“The next part of my journey is to make an impact … and there is a huge need in edtech in the way it impacts early childhood education,” she said. “With Jon [Oringer] being almost a pioneer of the multi-vendor platform, I want to be with the team that has that knowledge and brings the knowledge that I don’t have in technology.” Since coming to Miami four years ago, she has been working with education-focused charities but believes she can make more impact through entrepreneurship and tech. “It’s better if I can make it happen and democratize it.”

In addition to Karunaratne, Yasa, Mikkola and Gonzalez, here are the other fellows participating in the Fellowship (descriptions provided by Pareto):

Joshua Akinsola: Born in the UK who graduated in creative computing, he’s worked at Bloomberg, Google, Facebook and TikTok and is excited to explore the world of startups.

Johanna Bergsli: originally from Norway, she worked in Singapore and Dubai, where she launched a fitness platform, and now lives a  nomadic life.

Deepesh Chaudhari: a data scientist and startup founder with a passion for international development.

Amartya Koner: has a master’s in mathematics from IIT Kharagpur and worked at IBM and Visa.

Archit Matta: He is originally from India and pursuing his master’s in data science from Columbia University.

Felix Sosa: A PhD student at Harvard and MIT in machine learning.

Andy Wong: An iOS engineer with a strong product mind.

Kevin Yee: A software by day, sous-chef by night kind of guy. 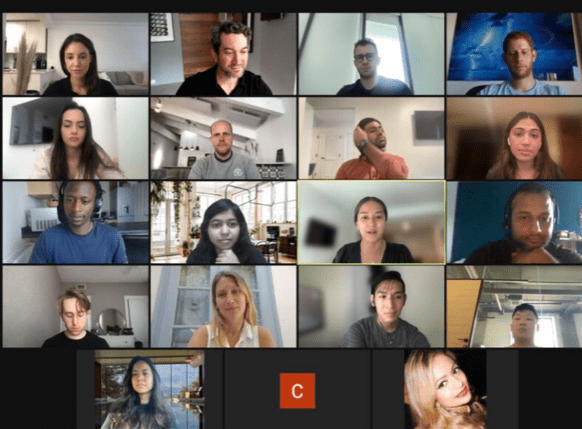 Photo at top of post of  Jon Oringer and Edward Lando was provided by Pareto.