More than 4,000 companies are using the Miami FinTech’s trading platform for recurring revenue

Just 10 months after its public launch, Pipe announced today that it has raised $250 million in strategic equity funding. The Miami-based startup, creator of the world’s first trading platform for recurring revenue, is now valued at $2 billion and is the fastest fintech in history to reach that valuation.

The round was oversubscribed by $100 million by a who’s who of investors. It was led by venture firm Greenspring Associates, with participation from new and existing investors Counterpoint Global (Morgan Stanley), CreditEase FinTech Investment Fund, Horizons, 3L, SBI Investment, Next47, Marc Benioff, Alexis Ohanian’s Seven Seven Six, MaC  Ventures, Republic and others. The funding comes on the heels of a $50 million raise just two months ago, and in total Pipe has raised about $316 million. Pipe is one of Miami’s new arrivals from California, putting down stakes last year.

Pipe has quickly emerged as one of the most important financial technology companies in the world,” said Ashton Newhall, Greenspring managing general partner, in a statement. “Our investment will further Pipe’s mission to put companies in the driver’s seat.”

By clearing a path for companies to look beyond equity or debt financing as their only ways to raise funding, Pipe says its platform enables entrepreneurs to grow their business on their terms. By treating recurring revenue streams as an asset, Pipe allows companies to trade future recurring revenue into capital today for scaling, without debt or dilution. Institutional investors purchase these recurring revenue-generating assets, which act similar to fixed-income products, and Pipe makes money from transaction fees on these trades. The platform is suited for companies with predictable subscription revenue, such as through memberships.

More than 4,000 companies have signed up for the Pipe trading platform since its public launch in June 2020 -- with 1,000 of them coming aboard since early March. With tens of millions of dollars being traded every month, tradable annual recurring revenue on the Pipe platform is in excess of $1 billion and trending toward $2 billion, said co-founder and co-CEO Harry Hurst. “Pipe has become a mission-critical part of our customers’ growth over the last year and this strategic financing further cements our position as the first and only trading platform for revenue as we build over the coming decades,” said Hurst (pictured above).

Pipe, co-founded by Hurst, Josh Mangel and Zain Allarakhia, will be using the massive round of funding to bolster its platform globally, and aims to expanding its offerings across every recurring revenue vertical including property management companies, sports and entertainment, and healthcare. Pipe’s platform was originally targeted at SaaS companies, but it has already attracted a broad range of companies.

“When Pipe first went to market, we were focused on servicing our first vertical SaaS, but now over 25% of the companies on the platform are in non-SaaS verticals such as telecoms, streaming services, direct to consumer subscription products and even unique verticals like venture capital fund admin and management fees, and sports teams trading their player transfer fees. These companies range from early-stage and bootstrapped companies with $1-200k in revenues all the way to publicly traded companies,” Hurst explained.

Hurst and Michal Cieplinski, chief business officer, were part of the leading wave of entrepreneurs and investors mostly from California and New York choosing the Magic City as a place to live and build their companies. Attracted to check Miami out by the buzz around Miami as well as the attractive time zone for doing business, they moved  from California in September 2020, and quickly set up the startup’s new base and first “Microhub” in Wynwood; Pipe now has several microhubs around the country and Hurst believes a series of small microhubs spread globally where team members could meet and collaborate will be the future in a post-COVID world.

Since then, Pipe’s Miami operation has also grown. Today, Pipe is a globally distributed company with 34 team members -- that's up 50% since early March -- and about a quarter of them are in the Miami area, Hurst said.

“While we plan on being a lean team, as we grow, inevitably we’ll continue to hire the best talent all over the world, and we’ll continue to add more team members in Miami as well,” Hurst said. “We’ll be hiring across all teams and hope we can continue to expand the team in South Florida - always. Miami is our first microhub and we have thoroughly enjoyed investing time here and plan to do so as we scale.”

Hurst adds, “Pipe continues to look forward to partnering with local Miami-based companies to give them access to growth capital and further fuel the vibrant startup scene.” 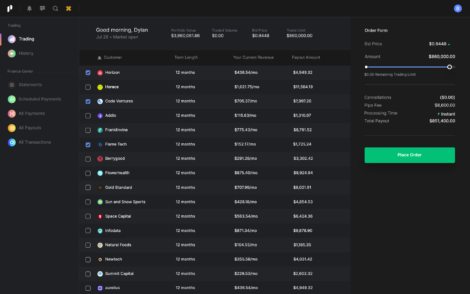