Sara Blakely:  ‘It is so baked in my DNA, I am always hustling’

The self-made solo-founder of Spanx inspired the crowd at Synapse Summit. Here’s what else we learned at the two-day conference for entrepreneurs.

Twenty years after founding Spanx, Sara Blakely has no plans to slow down, despite becoming the world’s youngest self-made female billionaire in 2012. She continues to grow her billion-dollar business – now venturing beyond undergarments and into apparel for men and women – as well as expand her impact through her foundation.

Blakely's reason is her why, she told the full-house crowd at this week’s Synapse Summit in Tampa, where she was the headline speaker.

“The why for me is to elevate women, to honor the women who came before me that didn’t have the chances that I had and even the women around the planet right now that still don’t. That’s what gives me my courage.”

Blakely, 48 and a mom of four children under 10, does that through the products she sells and her authentic story. She  also looks for ways to support female entrepreneurs every chance she can.

“I would like to balance out the feminine and masculine energy on the planet. I would like to encourage and support as many females as I can to start their own business, to fulfill their own potential, to encourage them and support them in leadership positions. I believe it’s about the balance. We will all be better served on the planet,” said Blakely, who was raised in Clearwater Beach.

In an on-stage conversation with Scott Omelianuk, editor in chief of Inc. Magazine, Blakely shared some secrets to her incredible success.

Sell the problem – it’s about what’s in it for them. That’s  a lesson and skill she learned selling fax machines for years by cold calling before launching Spanx.

“The best compliment I can receive is when someone says, ‘You guys created something I didn’t know I needed, but now I can’t live without. One of the things I always say is sell the problem you’re solving, not the product.”

Once she landed Neiman Marcus, her first major account -- and after solving a “crotch emergency” (finding access to a machine that makes crotches immediately) -- Blakely spent two years in the Neiman stores personally selling the product for them and turning the stores’ sales people into her brand ambassadors. “I was creating a free sales force.” She said she knew if she didn’t do this, the product wouldn’t be promoted and would fail.   “At every turn, it is so baked in my DNA, I am always hustling, making it happen.” 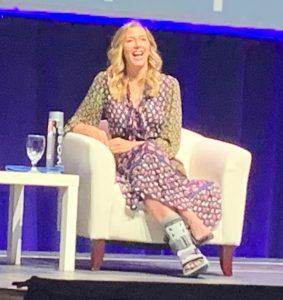 But the right mindset is a continuous work in progress: “If you can get over the self-doubt, you are probably going to come across something revolutionary. Mindset and courage is a beautiful place to be.”

Sometimes not knowing what you don't know can help you -- because you don't overthink and just try things.  She says she constantly and intentionally tries new things that scare her.

Here’s why you need a team: “I tell people as soon as you can afford to hire your weaknesses do it… As soon as I could afford to hire someone to do more of the operations side of the business, I did. As an entrepreneur one of the biggest gifts you can give yourself is to stay in your lane.”

Early on, though, the team wasn’t quite assembled when Oprah called and wanted to film her in a “staff meeting,”  She quickly called in her girl friends and the helpful worker at Mailboxes Etc. to be on her team -- for the day.

The two-day Synapse Summit was packed with workshops and speakers offering tips and resources for entrepreneurs. The conference attracted more than 7,200 people, more than 300 speakers, including several from South Florida, and 324 exhibitors.

Numbers like this for the 3rd annual conference are proof points that “Florida is much more than a great place to live,” said Marc Blumenthal, co-founder and chairman of Synapse. “This is where companies come to plug into Florida’s innovation ecosystem.”

With $500,000 in new funding from JPMorgan Chase, two entrepreneurial support organizations – Tampa Bay Wave and the newly opened Embarc Collective -- announced they would be increasing training and access to capital for women-owned startups. In the partnership, Tampa Bay Wave would run a 3-month accelerator and Embarc would host a Glaring Gap Summit. Both organizations will offer mentorship and coaching. Applications will be open this summer for a launch expected in the fall.

Would Miami win again? Almost. Jessica Primavera, co-founder and CEO of Unbound, a revenue-making marketplace and booking engine for experiential group travel, made it to the final round and won second place. Also competing were Nicole DeDoux of travel-tech startup Shimmy, and Areeya Lila ViewN, a customer data platform. Nice showing for the 305 and 954.

The Synapse mission is to tell the story not only of innovation in Tampa Bay but of the whole state, said Brian Kornfeld, co-founder and president of Synapse. And the story is starting to get out, he said, pointing out that Inc Magazine’s 2020 Surge Cities list of 50 includes six from Florida (Miami was number 10), “If Austin is weird and Chicago windy, Florida is going to be authentic,” he said. “As we tell our stories, the more take notice that innovation lives here.”

South Florida was well represented in other areas of the summit. Tigre Wenrich of LAB Miami Ventures spoke about trends in prop-tech and LAB Ventures' $50 million fund in the making that includes investors from the real estate industry. Melissa Medina of eMerge Americas, Anabel Perez of NovoPayment and Claudia Duran of Endeavor Miami spoke on the rise of startups founded by Latin Americans in Florida. Ridesurf, a Miami-based long-distance and event carpool app launched in 2019, partnered with Synapse for the summit and offers its services across the state.