‘Sleep really hasn’t changed much since the Romans,’ but Miami HQ’ed Eight Sleep is changing that

Melatonin, meditation, exercising, eating a lite dinner, eating before 8 pm, avoiding alcohol, spending one hour off electronic devices -- those are all tips for what’s called “good sleep hygiene.” But as Matteo Franceschetti, the CEO and co-founder of Eight Sleep, put it, “Elon Musk is taking us to Mars and using a recyclable rocket, and I’m still sleeping the way people did thousands of years ago.” Sleep really hasn’t changed much since the Romans, the Italian born and bred founder added.

Eight Sleep is a DTC mattress company with technology baked into it that regulates your body temperature as well as collects data to further improve your sleep the more you use it. And if you have a partner, don’t sweat it, the mattress’ sides function independently. All data goes directly to the Eight Sleep app, which also offers coaching on how to improve your sleep.

Franceschetti and his wife and co-founder, Alexandra Zatarain, recently moved to Miami from New York City, and while Eight Sleep is now a remote-first company, the two - who met in Miami about 10 years ago - were looking for a new home base and HQ.

“When we realized that the company was becoming remote-first, we wanted to find a place that would offer a healthier lifestyle, was cosmopolitan and had an international airport,” Franceschetti said. Miami was a clear winner and Eight Sleep became one of Miami Mayor Francis Suarez’s early converts.

Franceschetti, a serial entrepreneur (his first two startups were in clean tech), first started thinking about sleep when he was working on his other companies and constantly felt like a zombie. As a former tennis player, he was familiar with the concept of recovery, but he just couldn’t rest enough to fuel all he had to do while building a business.

“I started to think, ‘Can I recover in 6 hours rather than 8, and what else do I need to know about my health to lead a longer and healthier life?’” he told me in a Zoom interview.

So it’s no surprise that Eight Sleep’s target market includes, “High performing professionals in tech, business, finance, fitness etc. who use technology to live a healthier life,” he said.

To get things off the ground, Franceschetti spent about 2 years doing research on the problem, talking to potential customers, and meeting with doctors. Once he was confident enough to build the MVP, it only took the team about 6 months to get a product out in the market.

The company, which launched in 2016, has raised $70 million, gone through Y Combinator, has 50 employees, and offers two core products: the full mattress (called the Pod Pro) and a mattress cover (the Pod Pro Cover). Franceschetti explained that the products offer the same results. The mattress is meant for someone who is in the market for a whole new mattress altogether, while the cover is for someone who is happy with their mattress, but still wants to improve their sleep quality.

A queen-sized Pod Pro goes for $3,095 while the cover alone goes for $1,695. If the thought of buying a several thousand dollar mattress with bells and whistles is giving you a bit of a pause, you can try it before you buy it and vacation too at the Eight Sleep suite at the Hyde in Midtown for $200/night.

The three-person founding team (pictured above) is Franceschetti, Zatarain, who focuses on branding and marketing, and Massimo Andreasi Bassi, who is the CTO and also had two prior startups before helping to build Eight Sleep.

“He [Bassi] is really the AI and data genius here,” said Franceschetti.

For those of us who don’t sleep well, some have ventured to the sleep clinic and perhaps now sleep with a super sexy mask, none of which seems very pleasant.

“When people go to a sleep clinic they are so nervous and so stressed and any data they are able to collect isn’t very accurate,” Franceschetti said. “And for them, data is the end game, but for us data is the starting point because from there we’ll regulate and optimize the environment for you.” 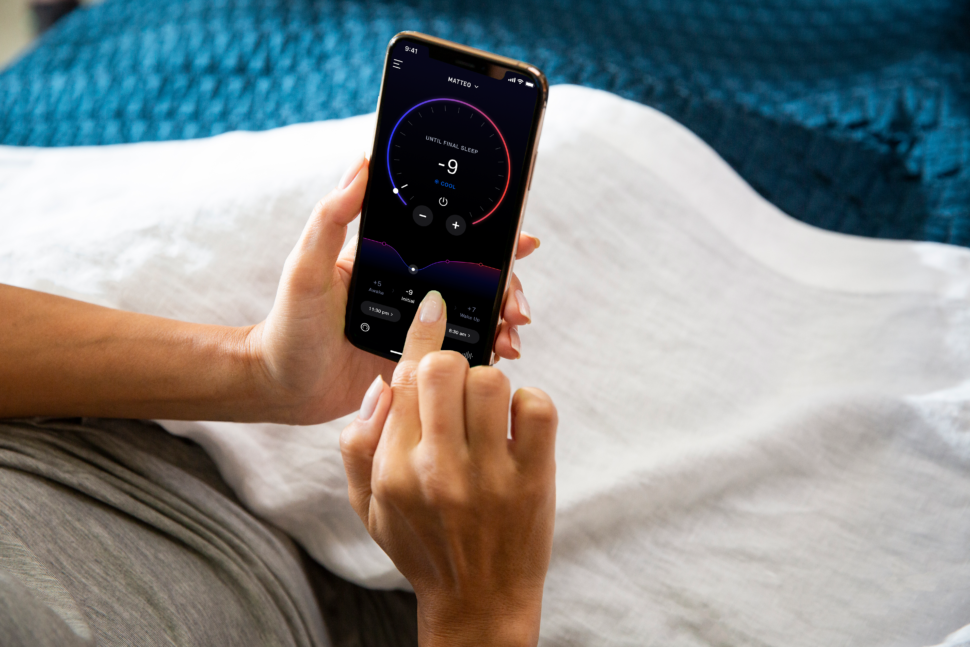