South Florida’s 2019 was one for the VC history books

But today, on what would have been the first day of eMerge Americas, the organization is unveiling its 2019 eMerge Americas Insights Report, with the support of the Knight Foundation and FIU, and it is about South Florida’s record-setting year for venture capital. The organization hoped to release it at the conference with much fanfare, but have times changed. 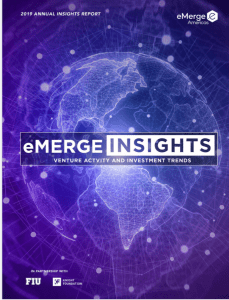 I authored the report for eMerge, and to me one of the most interesting trends was that in 2019 later stage deals, defined here as Series B or higher, comprised 21.5% of the deal value total. That’s a big jump from 13% in 2018. Among those later stage deals funded were REEF, Magic Leap, Technisys, Neocis, Vix, Healthcare.com, Pixeom and Bidtellect.

Here are some of the other highlights of the year that was:

The 40-page report slices and dices the data for South Florida and the state and also includes a Spotlight on Latin America. South Florida startups spotlighted were TissueTech, Arteza, Papa, Addigy and Xendoo (Please note that the report was compiled and all interviews were completed in January 2020).

Yes, 2019 seems like so long ago, now that we have been hit with a global pandemic, taking a mounting toll on precious public health and the world economy. We don’t know how long the U.S. coronavirus recession will last or how deep it will go, but like in all past recessions, the VC market will slow down, and the funding slowdown will likely last years, not months, if past downturns are any indication. CB Insights is predicting a 22% slowdown in seed funding globally for the quarter ending tomorrow.

Yes, in three short months, the world has changed – and furiously. But once South Florida and the world are through this, we can all hope to see more years in South Florida venture capital like the record-breaking 2019. As eMerge Americas team said in its letter,  "Our strength is, and always has been, our resiliency." We will get through this together.

In the meantime, stay home and stay safe, y’all.