The LimeBike of paddleboards is here, and it’s hoping to make a splash: Meet PADL

Andres Avello, Felipe Jauregui, and Khalil Khouri are all self-proclaimed “key rats,” the nickname given to kids who grew up on Key Biscayne. But little did they know that island living would one day direct their career trajectories. Over the years, the ocean-loving friends - who have complementary skills - have tried to start a fish tackle subscription box and a fishing social network. While those didn’t make it, their endeavors remained water-related and in August 2019 they launched PADL, a self-service paddleboarding startup whose stations are solar-powered.

“We have a patented dual locking system that locks both the boards and the paddle. With the use of the mobile app, they [customers] can unlock the boards,” explained Avello, the CEO and cofounder of PADL. 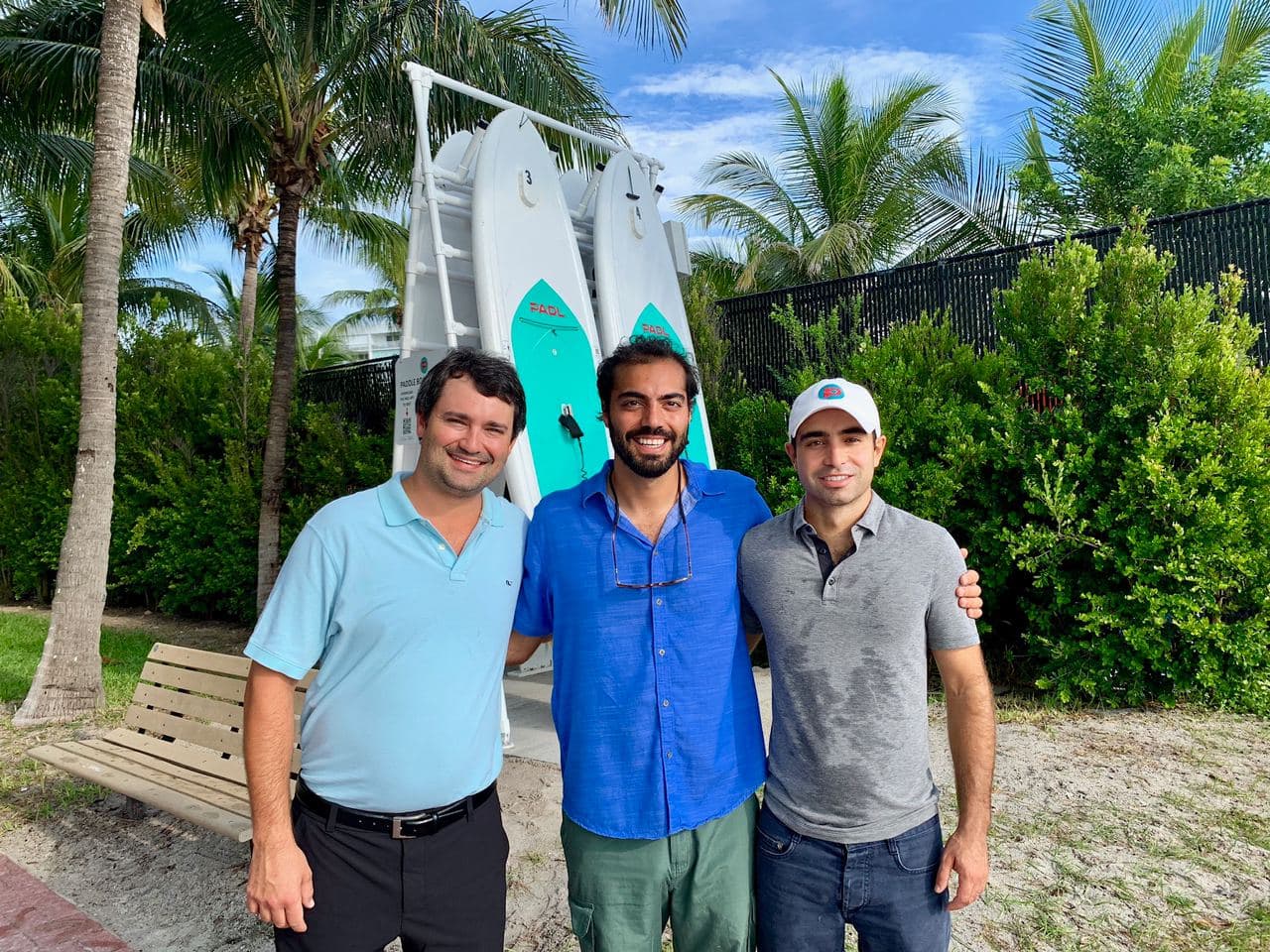 The idea for the technology for PADL came from other mobility startups.

“When we saw a LimeBike come onto the key, we just thought, ‘We have to use the same technology and use it for paddleboards,’” said Avello. If you have any doubt about his love for the water, his LinkedIn photo is of him on a fishing boat, while the background photo is of the ocean.

PADL works with municipalities and private resorts or residences to get permission to install a 4-board station on the property - an 8” by 8” contraption -  and the company shares the revenues with the property owners. For resorts and residences, PADL’s value proposition is that it also provides an extra amenity for the guests at zero upfront cost to the owner.

A small public strip of land next to the Key Biscayne Beach Club was the company’s first location, but now PADL can be found at 6 other spots from Palm Beach to the Keys, said Avello.

The company has raised $350K from friends and family thus far and is looking to raise $1.5 million, of which they already have $150K: $30K coming from Jose Ignacio Rasco, a key rat himself. Rasco runs the family office that owns Building.co as well as the .Health domain, which they are working to popularize as they did with .co.

“I recently did make an investment in PADL and I’m bringing a few other investor friends along with me. I’ve been speaking with Andres for a few months now, getting to know him and his co-founders. I like paddleboarding, but I'm not a regular. The logistics of keeping a paddleboard for most people make it very difficult to do regularly. Applying the on-demand and sharing biz models to this was an obvious solution, but with some challenges on the execution. When I went to see PADL’s first station in Key Biscayne, I thought it was a simple and elegant solution. Just as important, I love the team. It’s strong. All three of the founders complement each other and they love working together. PADL will make paddleboarding accessible for a lot more people and I’m excited to see their evolution as their vision goes way beyond just paddleboarding,” said Rasco. Indeed, the team plans to expand to kayaks as well.

At $24.99/month for unlimited use, their subscription is a pretty good deal considering many other places charge $15/hour. (You can also rent by the hour through PADL at the market rate of $15/hour). “67% of our riders are returning, 33% are new,” said Avello of their retention rate.

The company currently has 3 full-time employees - all of whom are co-founders - and 6 contractors. With a background in finance and experience working as the Director of Finance at Crystal Cruises, Avello serves as the CEO. Jauregui, who previously worked at an aerospace startup, functions as the COO, and the techie is Khouri, who worked in several engineering roles and has a master’s degree in mechanical engineering and robotics from Columbia University. That being said, the company is looking to hire a CTO with full-stack and hardware capabilities.

With the money it raises - PADL currently is crowdfunding campaign on SeedInvest - the startup plans to expand to 50 more locations, not all in Florida, and in fact, not all on the ocean. According to Avello, lakes are very popular for paddleboarding, “because the water is always smooth,” he said. Their winning approach, they’ve discovered, is to focus on areas with a lot of residents which will, in turn, create repeat customers. “Our method is residential first, so we go into a residential area as opposed to focusing on tourists,” Avello said.