Imagine walking into a welcoming workspace where you can talk to a software developer, a graphic designer, a business mentor or a startup founder. On any given day, you can ask anyone for professional or personal advice, whether it’s on how to organize a pitch deck to improving your website to registering a non-profit.

A year ago, this dream became a reality in Palm Beach County as 1909 opened its doors at 313 Datura St. in downtown West Palm Beach, thanks to a group of creators who worked diligently to make it happen.

1909, a non-profit organization, was launched in November 2018 by the Palm Beach Tech Association with support from the John S. and James L. Knight Foundation, after about six months of strategizing and raising funds. “It’s gone incredibly well, and we certainly learned things along the way,” said Palm Beach Tech’s CEO Joe Russo, who directed 1909 in its inaugural year.

1909 provides workspace and programming for creators, including entrepreneurs, creatives, developers and designers, all working on bringing their ideas to life. “1909 was built for entrepreneurs by entrepreneurs,” said Shana Ostrovitz, incoming Executive Director of 1909.

In the past year, 1909 has attracted 250 members, opened a second location in Delray Beach (135 E. Atlantic Ave.) and hosted four accelerator programs and multiple events. And it’s just getting started.

“In creating this space for people to come together and interact on a daily basis, we are just seeing so many people gravitating toward us and sharing with us that this is what they have been looking for,” explained Ostrovitz. “That’s a testament to what 1909 is — the culture we are creating and the space we provide. It’s about our members, about our members accomplishing their goals and having the impact they want in the world.”

Founding members of the 1909 team included Co-Founders  Russo and Danielle Casey, along with Jared Fishman, Aaron Nosbisch, and Ryan Walden, who is 1909’s Entrepreneur Director.

“We’re a startup ourselves and there was a lot of experimentation in the first year,” Ostrovitz said. The learnings?

“Really, people want to connect to other people and that is biggest value. So Instead of offering so many additional benefits or services or products, the one thing we really learned is to focus on our core – creating an environment where people can connect with other creators, build relationships and thrive. That is the most important thing.  We really don’t have to get so crazy in our offerings — we have something that people are thirsty for and focusing on that is what our members want.”

Accessibility is critical to the success of 1909, the name inspired by the year Palm Beach County was founded. That’s why 1909 memberships start at just $50 a month for use of the community spaces. For 24/7 access to the space and all the perks, including unlimited pringing, phone booths, showers and cold brew on tap, resident memberships cost $100/month and a dedicated desk with a mailbox and business address costs $350 a month. Private offices are available too. 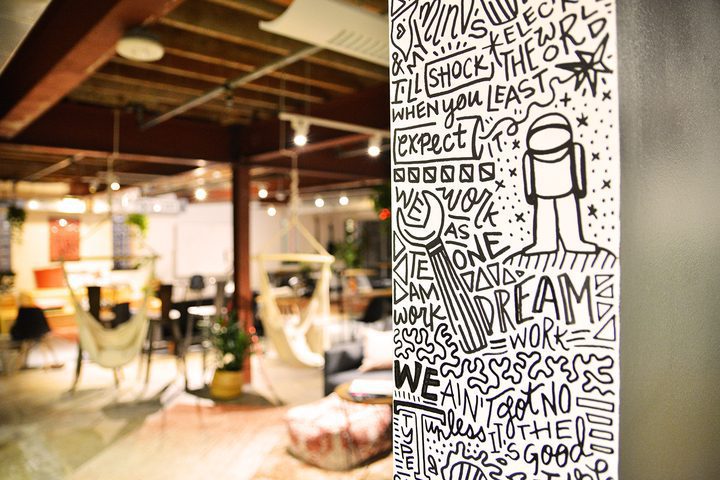 At 1909FEST, an event on Nov. 23 celebrating emerging businesses, music and talent, local bands that participated in the music accelerator will be performing and six selected startups from all the accelerators will be pitching for cash prizes. Find out more here.

Ostrovitz said in year two, the primary focus will be on growing membership and building more engagement and value for members in West Palm and Delray Beach. “We want to provide as much value to our members as possible. They are the true heroes of this story and they are one’s who will make long standing impacts in our community.”

Adds Russo: “Everyone here is doing something awesome, and we are really happy that they are doing it with 1909 and with our community of creators.”

This article was first published by Palm Beach Tech and is being republished with permission.