The Miami-based company formerly known as ParkJockey, the parking app startup, is now REEF Technology, and it says it is re-imagining the common parking lot.

The big vision is now beginning to emerge.

REEF Technology, backed by the SoftBank Vision Fund, is now the largest parking network in the North America with more than 1.3 million parking spaces in 4,500 locations. The company announced Tuesday it plans to transform parking garages and lots into “thriving hubs for the on-demand economy.”

REEF hubs will house a curated grouping of businesses and services specific to the needs of neighborhoods and the on-demand economy, the company said Tuesday. The move will help “future-proof” the garages as the growing on-demand economy and soon driverless cars will begin to make traditional garages obsolete. 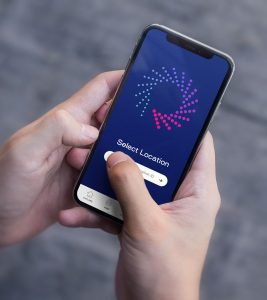 “At REEF, we believe a parking lot should be more than a place to store your car. Rather, it can be a hub for the community, connecting people to the businesses and services that keep us all moving forward,” said Ari Ojalvo, co-founder and CEO of REEF Technology, in a statement.

“REEF will completely transform what people, cities and businesses can expect from parking garages, in the same way the introduction of smartphone apps completely changed the way we think about cellphones. Accelerated urbanization has created a huge problem set that needs to be addressed urgently, and hubs will bring immense opportunity for growth, experimentation and versatility to improve our communities,” he added.

One part of the business will be REEF Kitchens for on-demand food delivery. Restaurants can affordably open in REEF’s Kitchens housed in proprietary containers in the on-demand hubs, to accomplish faster delivery at a lower cost to customers. REEF launched operations in downtown Miami and London in 2018 (photo of Miami hub is at top of post) with plans to open several hundred more kitchens across North America and the U.K., the company said.

Other businesses that will be part of the REEF hubs include electric bike and scooter rental companies  and peer-to-peer car rentals. The company is talking with micro fulfillment centers and is creating “ride-share car buffering zones” that reduce congestion, while drivers can also get auto maintenance or  their car detailed in the hub, the press release said.

“REEF is transforming urban parking infrastructure into modern tech-enabled logistics hubs and rejuvenating local economic vibrancy in the process,” said Michael Ronen, managing partner at the SoftBank Vision Fund. “The company is creating opportunities to work with last-mile delivery companies, such as Uber, DoorDash, GetAround, Nuro and others, to align interests and create win-win situations for all parties involved.”

ParkJockey confirmed in December that it had received a substantial investment from SoftBank as well as Mubadala Investment Company but did not disclose the amount nor the type of investment - equity or debt. An initial report in Axios put the investment at hundreds of millions of dollars and media reports speculated that ParkJockey’s team and its proprietary technology were what attracted SoftBank. Significant parking network purchases were part of the transaction announcement, and SoftBank was already an investor in other concepts for an increasingly automated, on-demand future for cities.

At the time of the mega-investment news in December, ParkJockey said it had about 100 employees. The press release on Tuesday said Ojalvo has assembled a REEF team of executives from Twitter, UberEats, Starbucks, Darden, Brinker, IBM and Westfield.  REEF, which lists offices in Brickell, has not yet returned a request for comment.

Ojalvo founded ParkJockey with Umut Tekin in 2013 as an app-enabled way to easily reserve and pay for  parking spots in selected garages and it scaled well beyond Miami and London, its two early markets.